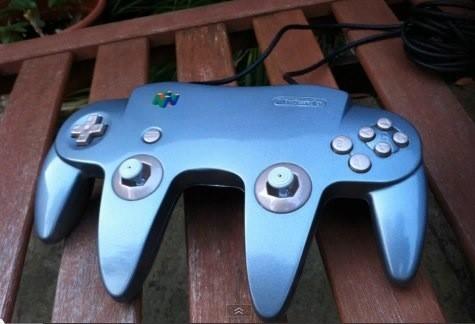 We've seen a fair share of controller mods over the years, but a dual-analog Nintendo 64 pad intended for Star Wars: Episode 1 Racer? That's certainly a simpler concept that can apparently turn out to be quite intriguing -- and functional. As the story goes, a friend of a modder named Clarky is an avid player of the sci-fi title, especially a hidden mode that allows users to individually command both the left and right engines of their pod-racer using the joysticks of two controllers. To make the control scheme less fiddly, Clarky essentially chopped off the D-Pad section of one and the action button section on another to join the two as one. The final result is impressive as well -- we'd be hard-pressed not to believe it's some rare prototype from the Nintendo labs at first glance. The unit also functions with the classic shooter, Goldeneye 64, as well since the game supports a similar dual-analog mode. Notably, the gamepad plugs in with two cords, so it's unlikely you'd be able to reap its full benefits on most of the system's games. You'll find a video of the controller in action below, and a full build log at the source link. Now, if only we could get our 4MB graphics Expansion Pack to work with the titles as well.

In this article: clarky, clarky2010, dual-analog, dual-analog n64 controller, Dual-analogN64Controller, gaming, goldeneye, made by bacteria, MadeByBacteria, minipost, n64, nintendo, nintendo 64, Nintendo64, star wars, star wars episode 1, star wars episode 1 racer, StarWars, StarWarsEpisode1, StarWarsEpisode1Racer, video
All products recommended by Engadget are selected by our editorial team, independent of our parent company. Some of our stories include affiliate links. If you buy something through one of these links, we may earn an affiliate commission.