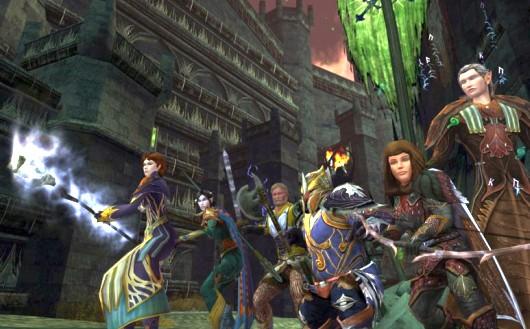 Guardians in Lord of the Rings Online are tanks. That's pretty much their entire purpose in life. But with the upcoming Riders of Rohan expansion, the class is seeing a substantial revision that will allow it to also take on a DPS role. The latest development blog on the class explains the new skills that Guardian players can look forward to as well as the changes implemented to allow Guardians a different role in groups.

The biggest change is the removal of Parry Stance and the addition of Overpower Stance, which grants all of the benefits of the old stance as well as increased damage and lowered damage mitigation. Several skills also have new or enhanced effects in Overpower Stance. Furthermore, Guardians will receive a new Legendary Trait to improve bleed effects and a few improvements to threat generation. Players anxious to see what new tricks are granted to the familiar tank-heavy class should look at the full blog for the details on the alterations.
In this article: class, class-mechanics, damage-dealers, dealing-damage, dps, expansion, f2p, fantasy, free-to-play, game-mechanics, guardian, guardians, lord-of-the-rings, lord-of-the-rings-online, lotro, riders-of-rohan, ror, tanking, tanks, turbine, turbine-entertainment
All products recommended by Engadget are selected by our editorial team, independent of our parent company. Some of our stories include affiliate links. If you buy something through one of these links, we may earn an affiliate commission.