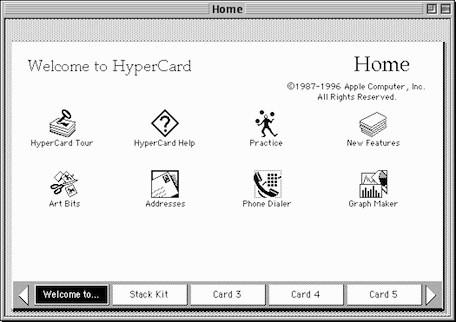 Twenty-five years ago today, HyperCard was released at Macworld Expo Boston. Apple's software construction kit for the rest of us began shipping on every new Mac as of August 11, 1987; you could also buy it for $49. It required 1 MB of memory (yes, one megabyte) and a pair of 800K floppy drives, or one floppy drive + a hard disk. (Announced at the same time: the ImageWriter LQ, the Apple Fax Modem, and MultiFinder.) Times have indeed changed.

For those who haven't been playing along at home for quite that long, HyperCard was an application where you could develop (or download, share or buy) all manner of 'stacks,' and those stacks used individual cards as the metaphor for a screenful of information. Linking those cards together in stacks was how you built things in HyperCard, whether they were stacks of all your recipes, basic presentation decks pre-PowerPoint, or, you know, one of the biggest selling PC games ever.

I started dabbling with HyperCard because at one point on the school computers it was the last application I hadn't actually played with. It was sort of intimidating to look at by itself, but as I saw other stacks and figured out how to assemble them, I wrote a Choose Your Own Adventure-style story where you could navigate with buttons at the bottoms of the pages.

I adored HyperCard. It let me feel like I had a tiny bit of control over one little piece of that Mac. I did like five or six stories, and then I built a recipe stack, and I played with a variety of other stacks, just to see what they could do.

Part of what got my attention about RunRev's LiveCode development suite, when I saw it in action at MacTech this year, was when they mentioned converting HyperCard stacks into LiveCode projects. I'd convert all my old stacks, if I could just find them someplace...

Ars Technica had a nice writeup earlier this year, and it prompted our own Steve Sande to reminisce about his experience with HyperCard as well. Speculation about why HyperCard was left to wither and die is also out there, as is a brief chat with creator Bill Atkinson about his feelings towards his brainchild (check out his iPhone PhotoCard app). Robin Sloan and Contents magazine made a web essay into a stack. There's even a HyperCard Twitter account.

Sadly, Hypercard was removed from the Apple landscape in 2004, and emulating an environment for it gets fiddlier all the time. There are some similar products if you want to play around a little, including LiveCode and SuperCard. It's also a lovely reminder to the old school among us, because it doesn't seem that long ago until you see that it has been twenty-five years. Now I have to go chase those kids off my lawn...

In this article: anniversary, Apple, features, history, hypercard, Mac, myst
All products recommended by Engadget are selected by our editorial team, independent of our parent company. Some of our stories include affiliate links. If you buy something through one of these links, we may earn an affiliate commission.