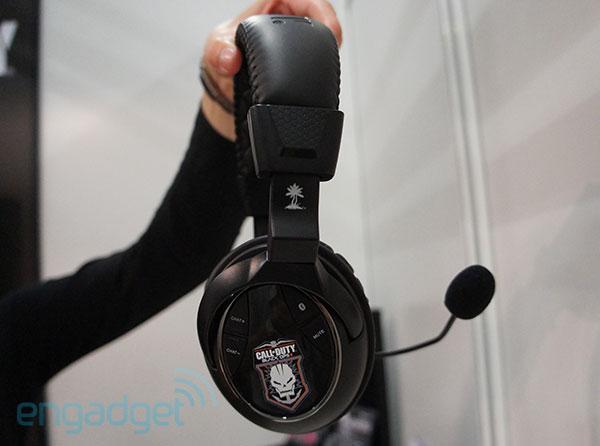 The crowds that filed towards the hulking Call of Duty: Black Ops II stand at Gamescom prove it deserved all that floor space and nearby, Turtle Beach was finally showing off its range of companion gaming headphones, ranging from in-ear buds to top-of-the-range wireless gaming cans with some heavy-duty audio customization options in tow. We managed to take a look at the whole selection (which repackages several models from the XP series and the incoming Seven series). While these were still developmental models (the Call of Duty decals will be painted on, not the stickers seen here), it should give you a good idea how the headphones will appear when they arrive in the next few months. We've got details on all the headsets (and the press release) after the break. Starting with the bank-busting Ear Force Tango headset ($300), these connect to both the Xbox 360 and PlayStation 3 through Bluetooth, with wireless Dolby Surround Sound. The Tango's dual-band WiFi radio runs on its own rechargeable battery for up to ten hours -- and from our brief time with them, they're plenty comfortable too.

Next up, the Ear Force Sierra, which is again pitched towards pro-gamers. It's another Dolby Surround Sound headset but this time it can be hooked up to a new controller that offers programmable presets baked into the volume controller. Turtle Beach told us that they worked directly with the Call of Duty creators to create these audio presets, meaning you can tweak the output to increase the noise of footfall, or just reduce the volume of in-game chatter from team-mates. It includes the ability to disguise your commands with voice morphing. The Sierra will set you back $280, but if you're not interested in anything wired, the Ear Force X-Ray are priced a little lower at $200, with dual-band wireless and a battery promising to last up to 10 hours.

If that's still a bit out of reach, the Ear Force Kilo come in at 80 bucks, and give you the same taste of Call of Duty branding -- if that's what you're after. These are slightly more lightweight than the rest of the new range and although all the headsets we tried were still engineering prototypes -- no chance to test the audio quality just yet -- the Kilo didn't sit as well on our head. Turtle Beach's final offering were the Ear Force Earbuds, which pack an in-line mic and hardy fabric cabling to avoid tangles. The buds are priced up at $70, according to Turtle Beach's E3 press release. If you like your prices in euros and pounds (who doesn't?) then hit the presser button below.

VALHALLA, N.Y. & COLOGNE, GERMANY – August 13, 2012 – Turtle Beach, pioneer and market-leader of the gaming headset category, is showcasing its Call of Duty®: Black Ops II line of advanced head-sets as part of its new fall line-up, and offering Gamescom 2012 attendees a chance to win a V.I.P. Express Pass to play Activision's and Treyarch's forthcoming Call of Duty: Black Ops II multiplayer before the epic blockbuster's worldwide release this November 13, 2012. Turtle Beach contestants will vie to be among the first in the world to play as they first compete in Turtle Beach's Entertainment Area, Hall 6.1, booth C10 within the Koelnmesse during Gamescom 2012 from August 15-19, 2012.

As part of an expanded presence in the European market, Turtle Beach's full Gamescom 2012 presence includes:

· Turtle Beach V.I.P. Express Pass Tournament
The Turtle Beach tournament area will offer Gamescom attendees the chance to game on the show floor for a chance to win a mini-tournament round and earn a V.I.P. Express Pass to Activision's and Treyarch's Call of Duty: Black Ops II multiplayer area. With lines at the Activision booth expected to stretch for extended periods of time, the Turtle Beach tournament area is a chance for fans to expedite their access to Call of Duty: Black Ops II. In addition, over 400 Turtle Beach headsets will also be in use across the Gamescom show floor, including at Activision's booth and multiplayer area.

· Turtle Beach's Latest Partnerships and Product Line-up
The latest Turtle Beach headsets available at retail locations and planned for holiday across Europe will also be on display at Gamescom, including:

o Ear Force SIERRA – Optimized for pro tournaments and competitive online play, the Sierra Programmable Dolby Surround Sound headset can also be loaded with Call of Duty: Black Ops II presets custom-created by Treyarch and the option to swap out with personalized presets. The Sierra features a streamlined design with a LED backlit control unit with touch control capabilities and limited edition Call of Duty: Black Ops II speaker plates for use with Xbox 360, PlayStation 3 and PC/Mac platforms. In addition, the Sierra features voice morphing so players can disguise their voices; Sonic Lens™ with sound field expander to widen or narrow the sound field and hear game play cues like enemy footsteps; and Ear Guard™ with Blast Limiter to limit the intensity of thunderous sounds like explosions and gunfire. MSRP: £279.99/€319.99 (inclusive of VAT).

o Ear Force X-RAY – Boasting a clean design and the latest tech, the dual band wireless X-Ray provides Call of Duty: Black Ops II players with an optimized Dolby Surround Sound experience for Xbox 360 and PlayStation 3. Featuring a rechargeable battery and dynamic Chat Boost, players can battle for over 10 hours in style and comfort with friends. MSRP: £199.99/€239.99 (inclusive of VAT).

o Ear Force EARBUDS – The Ear Force Earbuds are the ideal audio solution for gamers looking to display their dedication to Call of Duty: Black Ops II and enjoy premium quality audio while gaming, talking or listening to music on their smartphones, tablets or handheld gaming systems. Its inline microphone provides crystal-clear communication for hands-free calling or chatting during online game play, while its ear gels and design are optimized to eradicate ambient noise and provide optimal comfort. MSRP: £34.99/€39.99 (inclusive of VAT).


SEVEN Series for tournament play: Developed specifically for console and PC tournament use, Turtle Beach's new SEVEN series in collaboration with Major League Gaming features the Ear Force XP7 and Z7 programmable surround sound headsets, as well as the Ear Force TM1 tournament audio mixer. The XP7 and Z7 headsets will feature Turtle Beach's acclaimed Preset Technology for the ultimate in bespoke audio. The SEVEN Series is the ideal option in versatility for passionate gamers on the move, using a variety of unique cables and connectors to allow effortless movement from console or PC to smartphones, tablets or portable gaming devices. The TM1 allows up to six players to connect and chat with teammates or a coach during competitive play through a closed chat network for a zero latency chat experience. Each player has control over their game, chat and/or mic audio volume for the perfect personal balance, and all without any background interference through the aid of the TM1's noise gate technology. Complete details regarding the availability of Turtle Beach's line of official MLG Pro Circuit products will be issued in the coming months.

Ear Force M7: The latest in the M-series line of headsets designed for mobile gaming, the M7 offers high-fidelity audio through 50mm speakers for premium stereo sound. A leatherette headband and memory foam ear cushions offer comfort, style and excellent isolation from background noise. The headset also offers an in-line microphone with call control and a tangle-free braided cord. The M7 provides gamers the option to customize its look and feel with interchangeable speaker plates, and is compatible with smartphones, tablets, portable game systems and digital music players.

Ear Force PLa & XLa: These amplified gaming headsets are designed for PlayStation 3 and Xbox 360, respectively. Both offer a more immersive experience through amplified audio and built-in bass boost for increased depth and realism. Independent volume controls allow for personalized balancing of game and chat audio, and a microphone monitor allows you to hear your voice naturally as you speak. Both are USB powered and require no batteries. The PLa is also compatible with Windows and Mac systems. The XLa and PLa will be available in European retailers by September 1, 2012. XLa MSRP: £24.99/€39.99 (inclusive of VAT). PLa MSRP: £34.99/€49.99 (inclusive of VAT).

As part of its agreement with Nintendo, worldwide pioneer in the creation of interactive entertainment, Turtle Beach is creating an officially licensed line of Wii U™ gaming headsets with built-in chat functionality. These headsets will be compatible with portable devices such as the Nintendo 3DS™ and the Nintendo DS™ hand-held systems.

The dates of availability for the SEVEN Series, the officially licensed line of Wii U™ gaming headsets, the Ear Force ZLa, and Ear Force M7 will be announced in the coming months.

In this article: black ops 2, BlackOps2, call of duty, Call of Duty Black Ops 2, CallOfDuty, CallOfDutyBlackOps2, gamescom, gamescom 2012, Gamescom2012, gaming headphones, gaming headset, GamingHeadphones, GamingHeadset, hands-on, in-ear buds, In-earBuds, Seven series, SevenSeries, Turtle Beach, TurtleBeach, wireless, XP
All products recommended by Engadget are selected by our editorial team, independent of our parent company. Some of our stories include affiliate links. If you buy something through one of these links, we may earn an affiliate commission.
Share
Tweet
Share