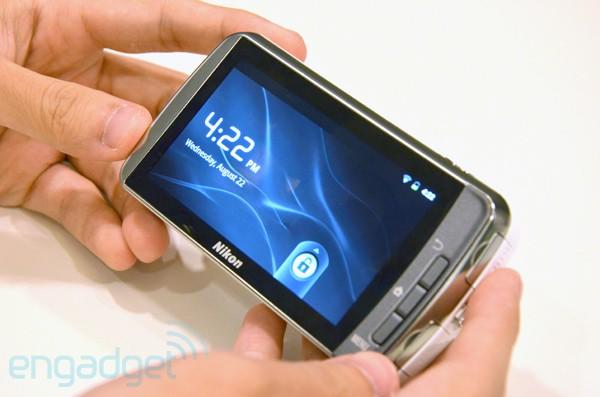 It was only hours ago when Nikon officially unveiled the Coolpix S800c, but we've already laid our hands on this eccentric device. As you've probably already heard, the main selling point here is that said "smart camera" is powered by a slick (and near-vanilla) Android 2.3.3 with Google services, so with the built-in WiFi, you can upload your 16-megapixel images or 1080p videos straight to your various social networks or other cloud services. Or you can, if you're in the mood, just play Angry Birds on the S800c, but that 1,050mAh battery might not be ideal for prolonged entertainment. Sadly, we weren't allowed to share any images taken with the demo units (sorry, usual Nikon protocol), but what we can tell you is that both the camera's speed and quality weren't bad at all, and likewise with the 3.5-inch 854 x 480 OLED multitouch display -- the high pixel density makes the PenTile arrangement more forgivable.

The most interesting thing we discovered was that it seems the camera part of the S800c can run independently from Android while the latter is still booting up. You see, rather than letting the device stay on standby like most other Android devices, Nikon uses a shut-down timer that activates once Android goes on standby. When the camera's completely switched off, hit the power button and you'll go straight into camera mode which lets you shoot immediately, then about half a minute later the interface seamlessly goes back to smart mode, which is when you can hit the back or home button to toggle the Android unlock screen (though we'd rather go straight into the home screen). This cunning trick would probably explain why we couldn't get any internal hardware detail from the few benchmark tools we installed, but we did squeeze out a score of 614 in Vellamo -- detailed breakdown in the gallery below. Anyhow, you can see the camera in action in the video after the break. 27
In this article: android, android 2.3.3, Android2.3.3, BSI, camera, compact camera, CompactCamera, coolpix, coolpix s800c, CoolpixS800c, featured, features, gingerbread, hands-on, nikon, s800c, video
All products recommended by Engadget are selected by our editorial team, independent of our parent company. Some of our stories include affiliate links. If you buy something through one of these links, we may earn an affiliate commission.
Share
Tweet
Share