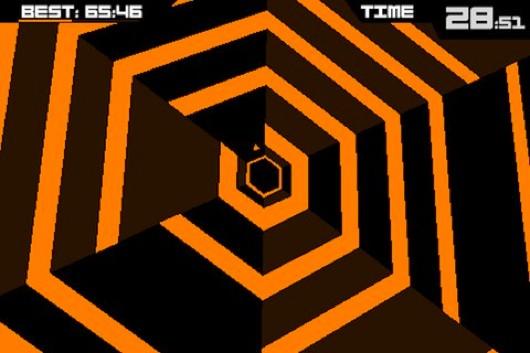 Super Hexagon creator Terry Cavanagh estimates about 45,000 downloads to date for his iOS action game since its September 6 release.

"I still haven't really processed it yet," Cavanagh told me at Fantastic Arcade. "It is such a hard game, and such a niche thing. I didn't expect it to get the reaction it's gotten. I thought it would be cool if I made enough sales to pay for the phone I bought, it would be cool. I didn't see it doing what it's done. It's up to like 45,000 sold so far."

Cavanagh admitted that "Zynga would be disappointed with those numbers. But me as an individual, I'm ecstatic. That's enough for me to live on. That's several years."

The launch of Super Hexagon has even eclipsed that of his hit gravity action game VVVVVV. "If you actually look at the launch of VVVVVV and the launch of Super Hexagon," he said, "Super Hexagon's bigger. Way bigger. The launch of VVVVVV was like an unprecedented event that I thought I'd never experience in my life again. I'm really, really happy with the game's reception and its sales." I'll have more from my interview with Cavanagh soon, focusing on the design of Super Hexagon.
In this article: ios, iphone, mobile, sales, super-hexagon, terry-cavanagh
All products recommended by Engadget are selected by our editorial team, independent of our parent company. Some of our stories include affiliate links. If you buy something through one of these links, we may earn an affiliate commission.