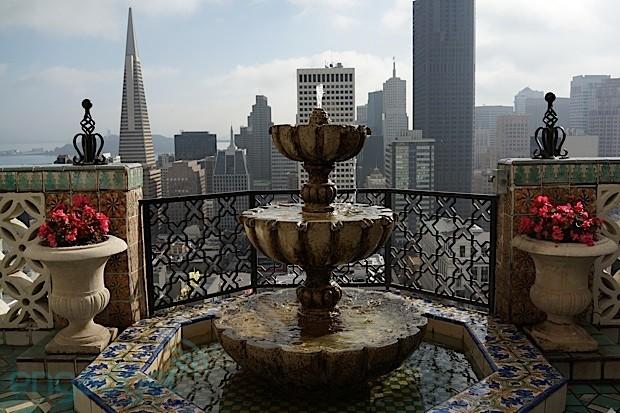 When we first got our hands on Sony's full-frame compact camera, the Cyber-shot RX1, we were allowed to touch it, but we couldn't use it for its stated purpose. Today, however, we got to put its 35mm image sensor and Zeiss Sonnar T* 35mm f/2.0 fixed prime lens to the test at a Sony event in San Francisco. Join us after the break to see a bit more of the City by the Bay and learn how the RX1 performed shooting stills and video. With a sensor this size, we were anxious to put the RX1 through its paces in both well-lit outdoor settings and indoor low-light situations. In both environments, the RX1 acquitted itself well. We really appreciated all the manual controls on the RX1 -- from the aperture ring to the exposure compensation and shutter adjustment dials -- as they allowed for speedy adjustments on the fly and kept menu fatigue to a minimum. Color accuracy was quite good in all situations, and its massive sensor did its job keeping noise to a minimum all the way up to its native max ISO 25,600. In a well-lit environment, the RX1 got us some very nice shots of a hazy San Francisco skyline, but the camera is built for close encounters. Naturally then, the Zeiss f/2.0 prime glass handled macro shots with aplomb, providing beautiful close ups with ample bokeh. We should mention that we were shooting with one of 11 prototype RX1's in existence -- though, given the quality results we obtained, it's safe to say that production RX1's will give you the same picture quality when they go on sale in December.

In addition to shooting stills, we also shot some 720p video both indoors and out. Results were pretty good. Wind noise was readily audible when filming outside, but the color reproduction was quite accurate, and the RX1 adjusted to varying amounts of light quickly on the fly.

Overall, the RX1 is a really, really nice compact camera. Shoving a full-frame sensor in a 4.5 x 3 inch chassis is quite a technical achievement, and the photos it produces are the highest quality we've ever seen in a shooter that size. Is it a replacement for a top-notch DSLR or quality ILC camera? Of course not. But, that's not why Sony created this king of Cyber-shots. The RX1 is a secondary shooter meant for photogs accustomed to full-frame DSLRs -- it provides them a portable cam to carry around without forcing them to sacrifice image quality. We'd say mission accomplished.