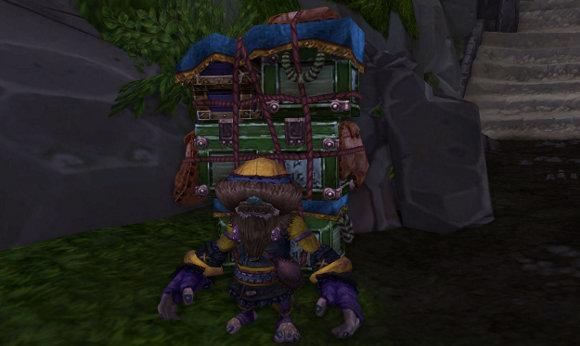 It's been a rough week for me, so I'll just say this - I don't know how you could hate the grummles. Their origin - created by the mogu out of troggs - means that not only are they one of the few intelligent races on Azeroth made both by another race native to the planet but from another intelligent race, but they also illustrate some interesting flaws and aspects to the mogu and their thinking. The mogu, upon discovering the troggs in the mountains of what would become Pandaria, decided to improve them.

Physically, at least, the grummles were a success. Well, one could argue that they failed when it came to being strong in order to crush the mogu's enemies - modern grummles aren't even capable of fighting off the hozen that plague them. It's clear that the grummles possess great endurance and the capacity to carry heavy loads long distances, making them excellent at packing and hauling. They clearly have strong senses of direction, dating back to their original uses in supplying the slaves laboring to erect the Serpent's Spine.

As we learn in The Mogu and the Trogg, the mogu who first created the grummles expected them to actually be warriors of a sort. Considering that this occurred during the creation of the Serpent's Spine, it was at least contemporaneous with the creation of the saurok. However, unlike the saurok, the grummle were absolutely unsuitable as warriors for a variety of reasons. The primary reason doesn't seem to be physical strength so much as a complete unsuitability for the role.

The troggs are many things, but no one has ever accused them of being unsuited to brutality. Yet, in the creation of the grummles the mogu seem to have removed this capacity. Keeping in mind that the troggs are descended from the earthen, the mogu have actually managed to remove a martial ability common to the original earthen, their frost and rock dwarf descendents and the troggs and kobolds that descend from the earthen as well. Considering the mogu deliberately wanted to preserve this aspect of the troggs and make use of it, how could they have so monumentally failed in doing so?

Sensing the flaws of the masters

Perhaps it wasn't that they failed in preserving those traits, but rather in understanding how they would be applied. As we see in the story, the mogu ordered the grummle to find enemies, and the grummle found none. The grummles became either so guileless that they could not tell what an enemy was or, possibly, were so acute in their perception that they instantly knew that telling the mogu about their enemies would be a very bad idea. "I saw what I wanted to see. You heard what you wanted to hear." This implies that the grummles were fully aware of what they were being asked to do, and willfully chose to do it poorly.

Why is this fascinating? Because it reveals that twice, the mogu created sapient servants to fulfill their wishes, and twice they failed to understand the thoughts of their own creations. The mogu created living weapons that could choose to turn their fury against their creators, and they created an empire-wide transportation and espionage service that chose to completely fail to spy for them. That chose to fail because by failing they would end up freed from mogu control, and all it took was simply misunderstanding what the word enemy meant. This means that the mogu, for all their power and intelligence, were tricked, deceived by their own creations, manipulated by the descendents of troggs. The mogu were lied to by the grummles and it worked because the mogu were so monumentally arrogant that, even after one of their slave races rebelled, they couldn't conceive of it happening again.

The cloak of guilelessness

Without the grummles' forbearance the young rebellions of what is today Pandaria, the forces of the hozen, jinyu and pandaren could never have successfully raised their arms against their masters. The grummle saw the hozen carving paths through the mountains to attack from behind, and played it off as nothing. They sniffed out the jinyu using the waters to learn the mogu's plans, and treated it as nothing. They watched the pandaren train body and mind to fight even without weapons, and acted as though it were nothing. Without the grummles, the mogu would still rule.

Today the grummles primarily inhabit the Kun-Lai Summit. They are masterful traders, using the gifts they inherited from the first grummles, their great strength, durability, and keen senses (especially smell) to serve as a kind of transport network throughout the summit. The grummles keep the high monasteries (such as the Temple of the White Tiger and Shado-Pan Monastery) supplied. The grummle concept of the 'luckydo', a lucky item determined in part by the keen grummle sense of smell, has grown to be central to their semi-nomadic society. Since grummles consider smell (one of their keenest senses) to be inherently lucky, they often end up carrying fairly pungent items as their personal luckydo. You'll find most grummles today along the Burlap Trail that connects the Shado-Pan Monastery to the lower regions of Kun-Lai, living and working in caravans that bring goods up and down the mountains.

In the end, the mogu underestimated the grummles. They knew the whole time who their real enemies were, and they knew exactly where they were and what to say to them.

While you don't need to have played the previous Warcraft games to enjoy World of Warcraft, a little history goes a long way toward making the game a lot more fun. Dig into even more of the lore and history behind the World of Warcraft in WoW Insider's Guide to Warcraft Lore.
In this article: featured, grummle, guide, guide-to-lore, lore, lore-guide, mogu, role-play, role-playing-guide, rp-guide, trogg, world-of-warcraft-lore, wow-guide, wow-lore, wow-role-playing, wow-role-playing-guide, wow-rp, wow-rp-guide, wow-rping
All products recommended by Engadget are selected by our editorial team, independent of our parent company. Some of our stories include affiliate links. If you buy something through one of these links, we may earn an affiliate commission.