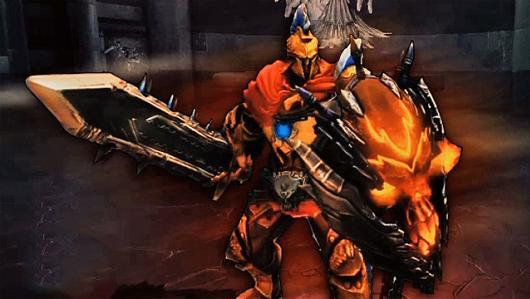 Halloween is a holiday when people typically dress up in outlandish costumes and go out hunting for treats. This year, I got to put a bit of a different spin on it by dressing up as a mythological god and going out to hunt for gold and items in some games of SMITE. Hi-Rez invited Massively along for its Halloween stream earlier this week, and I tagged along for some great fun. Despite being relatively inexperienced with the game, Reason Gaming's Lassiz was along for the ride as well, and his professional play helped lead us to a decisive victory.

Although it's still in closed beta, SMITE currently boasts a surprisingly large playerbase with hundreds of thousands of players and a very unique twist on the MOBA style. If you're looking for more information or a way to try the game for yourself, read on!

Meeting with the Hi-Rez guys

Before the game on the stream, I got together with one of Hi-Rez' community guys, Gabriel Mughelli, and we played a few matches beforehand. I got to try out SMITE's Joust mode, a gametype designed for 1v1 lane practice, and Gabriel and I engaged in a bit of friendly trash talking (mostly of ourselves) while we dueled.

We stepped into the game itself, and I picked Hades to fill the tank/initiator role, while the rest of the team picked bruisers or ranged damage dealers. Lassiz got to an early start as Cupid in the mid lane, performing very well and forcing his opponent out. In the right lane, I teamed up with one of the stream viewers, an excellent Wukong player. Our lane also performed well, securing the game's first kill and denying the enemy team farm. I made a few slip-ups along the way, but Wukong had my back, and we also took down an early turret. Our left lane did similarly well. After the enemy started ganging up on mid lane, we grouped up and ambushed them, leading to a devastating teamfight that allowed us to push up mid for the win. Overall, the game was pretty short and one-sided, most of which was probably due to Lassiz' expert play.

Afterward, I had a brief chat with Duke, Hi-Rez' community manager, about my impressions of the game, then I played a few more games with Gabriel before logging out.

My first impressions of SMITE

SMITE is first and foremost a MOBA. Even though it has a third-person perspective and a focus on skillshots and aiming, it is a MOBA and has very standard elements such as laning, jungling, turrets, items, experience levels and ultimate skills.

Visually, SMITE looks great. The third-person perspective gives it a more visceral feel, and using god powers is an absolute blast. Some animations, particularly ranged autoattacks, feel a bit clumsy, but the spell animations look great, and the other character animations are fantastic.

Many of the MOBA parts of SMITE felt very similar to League of Legends. There are two powerful neutral camps, one of which is weaker and gives a team-wide gold and experience boost, the other additionally giving a team-wide powerful buff. Additionally, many of the items seem parroted from League of Legends. I'm a League player, and I regularly call items by their LoL analogues, such as "Bloodthirster gloves" (Devourer's Gloves), "Rabadon's Deathstick" (Rod of Tahuti), or "Thornmail" (Hide of the Nemean Lion). I don't think that borrowing these elements from LoL is necessarily a bad thing, and there are many items that don't parallel those in LoL.

One thing that I really like about SMITE is how the item system is easy to understand. Each item has three upgrade tiers, and there are no component items to mess with. Just buy the item you want and upgrade it, or buy the fully upgraded item with just one click if you have the gold. I like this system a lot better because it lets me guess what my opponents' endgame plans are; if I see a Fatalis in the enemy's inventory, I can be sure that it's going to stay a Fatalis and not turn into some other item. It also tells me that my opponent wants attack speed and cooldown reduction and lets me guess what he might want to do with it.

SMITE also has "summoner spells," but they are handled much differently than they are in League of Legends. They are purchased items with only one rank, and players can purchase two of them whenever they have some extra gold. They can also be sold, so a player can buy an early game jungling spell and sell it off later for a late-game crowd control disruptor or AoE slow spell. I really like this system a lot. Players are given a fair bit of gold in the early game to buy several low-tier items or spells and still have a bit of room for potions, so there's a lot of diversity in early game builds. There are no pre-game choices (such as runes) other than character selection, so having a bit of extra gold to plan against your lane is a nice feature.

One very interesting change is that minions give gold to all hostile players within a certain radius of them when slain. Last-hitting still gives you more gold, but nearby players still get something even if a last-hit is missed or one player is feeding the last-hits to his partner. I think that this change helps take away from the "passive support" in League of Legends (it also helps that there are no dedicated supports in SMITE), but it also de-emphasizes last-hitting in lane and can lead to more passive laning in general. I personally like the way it was implemented, but it's a design choice that some will enjoy less.

As I said on the stream, gods in SMITE are overpowered. Some stream viewers took this to mean that I think there are balance issues, but I'm nowhere near experienced enough to really make that judgment call. I joked with Gabriel that I think Cupid's design is way too strong, but I haven't played the game long enough and he might be totally fine. What I mean by "overpowered" is that characters in SMITE are much more powerful than is typical in a MOBA. Characters have short cooldown AoE crowd controls that last for multiple seconds, mage nukers have powerful support abilities, and ranged carries have initiation (or anti-initiation) tools. SMITE feels like the Marvel vs. Capcom of MOBA games, where there's a bunch of ridiculously overpowered characters and the game feels really over the top. That's not a criticism of the game. Gods should be powerful, after all, and playing a really powerful character feels really good. I'm a huge advocate of empowering the player, and SMITE does a really great job in that regard. Even characters I feel are kind of weak still feel really strong when I sit down at their controls.

How can I play?

I was very pleasantly surprised by SMITE. While many MOBA players will always have their "main" game, SMITE is fun enough that it's worth a try. The third-person perspective really adds a unique feel to the game, and I find it very relaxing to play. I absolutely recommend trying it out, and if you aren't one of the lucky few to have a beta key, just ask on the official forums if someone has an extra invite. My only regret is that there are no Babylonian gods. Who wouldn't want to see Gilgamesh and Thor go hand-to-hand?

Massively's not big on scored reviews -- what use are those to ever-changing MMOs? That's why we bring you first impressions, previews, hands-on experiences, and even follow-up impressions for nearly every game we stumble across. First impressions count for a lot, but games evolve, so why shouldn't our opinions?
In this article: babylonian, competitive, f2p, featured, first-impressions, free-to-play, gods, greek, halloween, hi-rez, hi-rez-studios, holiday-gaming, moba, multiplayer, multiplayer-online-battle-arena, mythological, myths, norse, pvp, reason-gaming, roman, Smite
All products recommended by Engadget are selected by our editorial team, independent of our parent company. Some of our stories include affiliate links. If you buy something through one of these links, we may earn an affiliate commission.