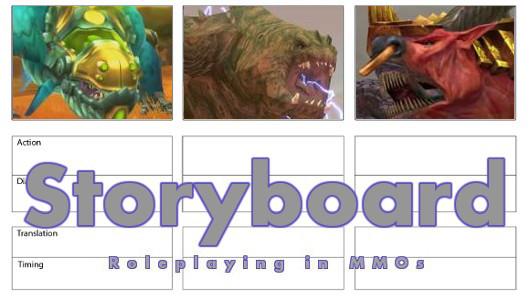 No MMO, to date, has a system to facilitate roleplayers interacting with one another outside of actual roleplaying. There are hubs you can haunt, there are things you can do, and there are addons in the games that support them, but at the end of the day, all you can do is throw your hat into the ring and hope against hope that no one is going to look at you strangely.

Odds are good that you don't really want that experience outside of a high school dance and quite possibly not even then. So you need a way to know that you're getting in good with the roleplayers. In short, you need a community.

I've been thinking of late about what community sites should be doing and what they actually can do. It's a point of contention because fostering a solid community relies strongly on having a central point of congregation, but trying to build a single community for an entire game's roleplayers is exceptionally difficult.

Roleplaying community sites have a major hurdle to clear before they even go live: People have to know about them. There has to be some way of getting out the information that these sites exist in the first place and urging everyone to go visit because the game itself is not going to give this indication.

This is problematic. I've mentioned before that getting everyone in one place is one of the functions that an official roleplaying server provides, but community sites need to get everyone in one place without providing the usual incentive of playing the game. A community has to be formed and maintained, and new people have to keep rotating in.

It gets even more problematic when you consider that communities are not naturally the most welcoming places. No matter how friendly and open your players might be, odds are good they're not going to regard a newcomer as being a vibrant addition to the community as a whole. It's also unlikely that a newcomer will feel comfortable with the community, since he hasn't had nearly as much time to grow accustomed to all of the names and faces running around.

The best defense here is to start advertising early and often. If someone has an interest in the game, she'll have an easy time hearing about the site if everyone knows about it from hearsay if not experience. But even still, in the best cases, I'd say that a game without a designated RP server can count on a single main community catching about 60% of the roleplayers in a game. The majority, but not all.

All of that pales in the face of another, more serious problem: People do not get along.

There's an idea that people will get along if they're all talking about a shared interest, but the trouble is that it never works. There are roleplayers I don't get along with. Some of them are people I consider to be bad roleplayers for one reason or another, but some of them are just people with whom I can't establish a pleasant relationship. Even without trying to, we get on one another's nerves.

Having a one-site-catch-all stop for roleplayers will not change this. No matter how desperately you try, there are still going to be people who do not mix well in the community. Factions will form, splinters will happen, and even though you try to make everyone play nicely, human beings are exceptionally good at not playing nicely.

So once you've gotten your 60% of the people, I'm going to bet that you could plot them all along a spectrum, and the 1% at one end of the spectrum is going to absolutely hate the 1% at the other end of the spectrum. And everything you do to try to appease one side or the other is going to steadily push people to form sides... or if you try to stick to the center, the edges are going to splinter off to communities where they don't have to deal with the other side.

Note that thus far, all we're talking about is giving people a place to gather and talk. We're miles away from trying to form some sort of community standard. Actually creating rules is going to introduce an entirely new set of rage-filled posts.

So what can be done?

In an ideal world, community sites and community organizers really should take a more active role in creating and enforcing a standard. Being a sea of unique snowflakes is all well and good, but standards are also a good thing, and it'd be great if we had a world where standards for roleplaying and interaction were centralized and enforceable.

This world does not exist. The best that a roleplaying community can actually do is gather people into one place and hopefully -- hopefully! -- provide an environment in which most of the people present actually get along.

It's a pretty low goal, but aiming for more inevitably results in failure because there's no way to actually enforce any community standards, since anyone who dislikes a rule can just ignore it with no real threat of punishment. There's not even a way to say that you represent roleplayers as a whole in one game/server/whatever because there are people who won't go to your site, just like there are people who won't go to official forums. All you can do is provide a gathering spot and hope against hope that the community that shakes out is kind, helpful, and friendly.

That's what community sites can do -- provide a gathering place, let people know about other gathering places as well, and hope that people will behave maturely. That's way less than should be possible, but there we are.

Feedback, comments, questions, and shouts of denial can be left down in the comments or mailed along to eliot@massively.com. Next week, roleplaying absolute insanity. (Not absolute roleplaying insanity. That word order means a lot.)

In this article: community, community-sites, conflict, contention, drama, drama-explosions, featured, gathering-points, opinion, roleplay, roleplayers, roleplaying, roleplaying-drama, rp, story, storyboard
All products recommended by Engadget are selected by our editorial team, independent of our parent company. Some of our stories include affiliate links. If you buy something through one of these links, we may earn an affiliate commission.