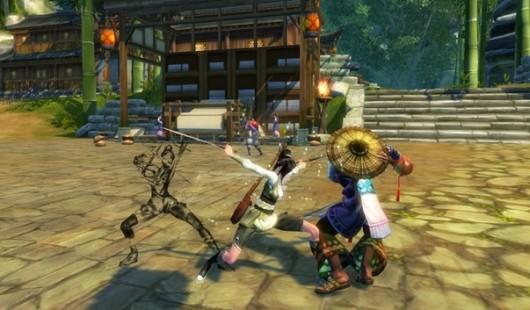 Perfect World's upcoming Swordsman Online is all about combat, combat, and more combat, which means that combat needs to be divine. Today we've been treated to a video demonstrating six of the game's 10 "clans," the fighting styles that players can adopt in their war against high health bars. Within each of those clans are three paths that may be chosen by players at will.

While the video doesn't clearly state which clan is on display, it still provides a useful look at Swordsman Online's fights. There is everything from hand-to-hand melee to whirling chains to giant cannons. Because in a game called Swordsman Online, it'd be silly not to have giant cannons firing quarter-ton balls, yes?

Check out the video after the break and let us know which style suits you the best!

In this article: ancient-china, beta, clan, class, classes, combat, combat-video, fighting-styles, path, paths, perfect-world, perfect-world-entertainment, player-created-skills, stealth, swordsman, swordsman-focus-test, swordsman-online, video
All products recommended by Engadget are selected by our editorial team, independent of our parent company. Some of our stories include affiliate links. If you buy something through one of these links, we may earn an affiliate commission.