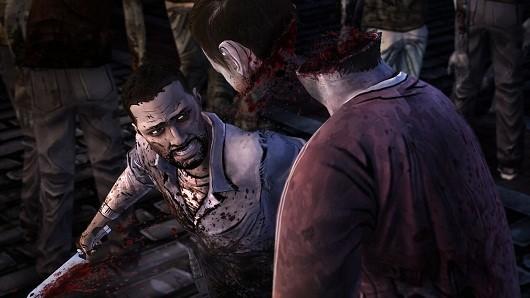 Stay after the credits of The Walking Dead Episode 5: No Time Left.

I don't care what decisions you made throughout the episode, and I don't care how many people you killed, saved or sacrificed in all of the previous episodes combined. I don't care if you played Lee as a passive leader or a vengeful one, compassionate or sterile or practical, or if you think the entire series sucks – stay after the credits of the final episode. To cut off the credits of this installment early is tantamount to taking a bathroom break one minute before Darth Vader mutilates Luke in Cloud City, or Bruce Willis realizes he hasn't spoken to another person in weeks.

The moment is brief, as is the entire episode, but believe me, you won't feel cheated. After all, Telltale warned you: There really is No Time Left. 4
There is an art to telling a captivating story, and there are at least five arts involved in telling numerous, disparate stories at the same time, along the same vein and throughout varied, personalized plot decisions made by millions of unique people. In No Time Left, writer Sean Vanaman is parts Dali, Poe and Tolkien, blended up and spread across Dorian Gray's canvas.

The tale is twisted and terrifying, heart-wrenching yet timeless, much like the infinite, undead existences of the series' antagonists. If stronger emotions have been wrenched from your gut while visiting an art gallery, I'd love to hear about it.

The entire episode has a feeling of finality about it. In a sense, this makes No Time Left easier to play. It begins with a jarring, stressful decision with immediate repercussions that will impact the rest of the gameplay, and from then on the episode is all about meeting that end, facing what it has to offer and making the best of the time allotted. The end isn't sitting around, waiting for you to reach it; the end is coming for you. This finality is cleansing and makes tough decisions clearer, forcing focus on the one thing that truly matters – keeping Clementine safe.

No time before has Clementine's life been in more danger, never before has she been in such a dire situation, and you with so few means of protecting her. For that reason alone, episode five is the most terrifying installment to date.

At the end of every previous episode, there was one saving grace: Clementine was alive. But this is number five. This is the final episode in a series that prizes dramatic death scenes; no time before has Clementine's life been in more danger, never before has she been in such a dire situation, and you with so few means of protecting her. For that reason alone, episode five is the most terrifying installment to date.

It is also one of the most beautiful. No Time Left is cinematic. Some of the shots are taken directly out of the most creative Hollywood directors' playbooks, with wide, still shots and life-like, subdued awkwardness among characters, between frantic action sequences seamlessly integrated as controlled cutscenes. When Lee barges into a mob of wandering undead and a hectic, Latin guitar tune overlays the sound of his QTE mutilations, it plays like a Tarantino film, or the quirky, black humor and violent ridicule of humanity reminiscent of David Fincher or Terry Gilliam. It's fresh and fun on a deeply disturbing level.

The mechanics are satisfying, accounting for more senses than purely emotional – the gameplay drives players to truly fight for their digital lives, forcing muscle fatigue on top of mental taxation in the most action-driven moments. Telltale remembers the player and truly thinks through its engagement decisions, choosing ideal moments to begin button-mashing and force split decisions on strategy to keep the tension constant.

The story itself is thickened by the inclusion of a subtle, Ted Bundy-esque enemy, whose appearance asks the age-old question, "Who is the true monster: the undead or the living?" (Spoiler: It's both.)

No Time Left also explores the depths of human tolerance, dissecting what it means to survive in the worst possible scenario, and what it means to keep someone you love alive in the same situation; realizing that these two paths are sometimes mutually exclusive. As a writer, I recognize how difficult it is to make an audience member buy the most outrageous aspects of your story, moments that make people cringe, gasp or cry, and No Time Left is full of them. These important moments are all thoughtfully integrated, with plenty of subtextual foreshadowing and offhand commentary to make each action feel logical, natural. More than that, most scenes carry a deep, irreparable sadness: The desperation of watching a child transform into an adult, saying goodbye to innocence before anyone is truly ready.

Of all the potential endings my mind rebelliously contemplated before playing, all the ways I accidentally pondered this season could end, I didn't suspect this one. It never crossed my mind. Perhaps it's too painful, even for this series, and my self-preservation instincts blocked it out. In fact, I can think of only one ending that would have been worse. Telltale made a good choice, picking the ending it did, because the worse one would have made me loathe the entire series and this episode in particular. I would have written hate mail.

But that was my ending, composed of all my decisions and with my own brand of emotional power. Other players may experience something entirely different on the screen. The internal struggle, though – I believe we all share that.

Besides, that's all before the credits roll. Before they end, when Telltale is still orchestrating a symphony of violence, pain, relief, love and desperation. Before the cliffhanger, the teaser for more. Before we are given one more reason, against all odds, to hope through our fear.

Don't be afraid. Just be ready.

This review is based on final PC code of The Walking Dead Episode 5: No Time Left, purchased by Joystiq.

Joystiq's review scores are based on a scale of whether the game in question is worth your time -- a five-star being a definitive "yes," and a one-star being a definitive "no." Read here for more information on our ratings guidelines.
In this article: episode-5, episode-5-no-time-left, episode-five, microsoft, no-time-left, pc, playstation, ps3, Telltale, TellTale-Games, the-walking-dead, xbox
All products recommended by Engadget are selected by our editorial team, independent of our parent company. Some of our stories include affiliate links. If you buy something through one of these links, we may earn an affiliate commission.