HP's newest laptop is sexy, but you can't buy it until next year 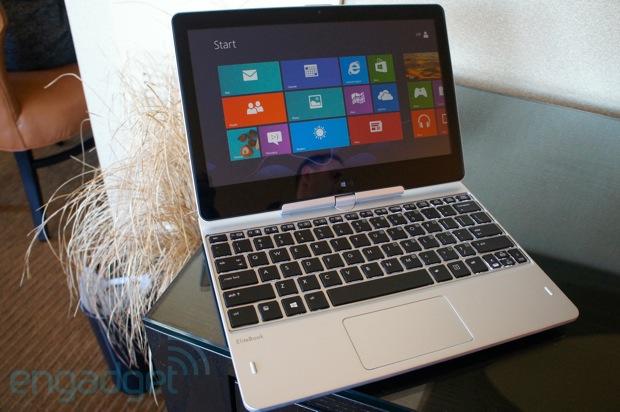 See that laptop up there? Basically, HP has announced something like that every year for we don't even know how long. It's always a convertible PC of the traditional sort, one with a fixed screen that swivels around and can fold down into tablet mode. It always supports a mix of pen and finger input. It's always made of sturdy magnesium alloy. And it's almost always aimed at businesses.

All that's true of the EliteBook Revolve, the laptop HP unveiled today and which we've so helpfully featured in the photo gallery below. The difference, of course, is that this is the company's first old-school convertible to run Windows 8, whose finger-friendliness has the potential to change the way we interact with PCs like this. As it happens, you could configure the Revolve with Windows 7 and you could buy an optional pen to go with it, but obviously, if you'd prefer to use your fingers, you'll have a lot more luck here than you would have with earlier models.

In terms of design, this is indeed made of mag-alloy, with a total weight of three pounds, and it was tested in accordance with the military's MIL-STD 810G standards. Unlike previous EliteBooks, though, it sports soft, rubbery surfaces instead of the brushed metal we've come to expect from HP's high-end business machines. Lift the lid and you'll find a backlit keyboard and an 11.6-inch Gorilla Glass screen, with resolution capped at 1,366 x 768. Inside, it has pretty much the exact specs you'd expect to find on any new Ultrabook: up to 256GB of solid-state storage and your choice of Core i3, i5 and i7 CPUs. And though it doesn't quite make up for the middling resolution, there's at least an open memory slot, allowing folks to go beyond the standard four gigs. Rounding out the list, this thing has built-in NFC, TPM and a SIM slot supporting LTE in the US and HSPA+ everywhere else. That answers just about everything -- everything except for price, anyway. HP says the Revolve won't actually go on sale until sometime in March, so until then, your guess is as good as ours. In this article: EliteBook, EliteBookRevolve, hands-on, hp, HpElitebook, HPRevolve, Revolve, video
All products recommended by Engadget are selected by our editorial team, independent of our parent company. Some of our stories include affiliate links. If you buy something through one of these links, we may earn an affiliate commission.