Curiosity version 2 is 'what the experiment always should have been' 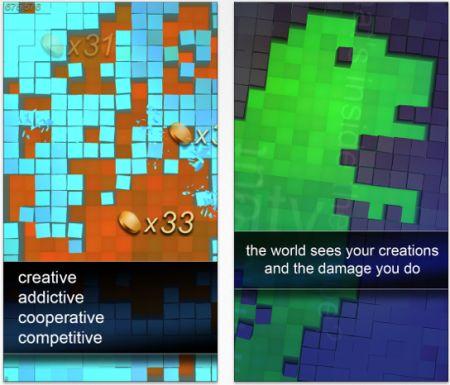 Peter Molyneux's experimental game company 22 Cans is already hard at work on its next title, Godus, which it's trying to fund through Kickstarter. But the company's also still updating its first title, Curiosity, and version 2.0 has arrived on the App Store today. This is a significant update, according to the company, calling it "what the experiment always should have been."

That means this update offers more than server reliability and squashed bugs. Now you can now look at the cube from afar and watch, in purportedly real time, other people hacking away at its surface from far away or close up. There are also new items available via in-app purchase, including the badger and the golden badger, which will randomly bound around the cube and knock off squares as they go.

Honestly, the "game" itself isn't all that different. Items are still priced super high for what they actually give you, and players aren't all that much closer to hacking away to the center of the cube. However, the core experience is still free, and it is kind of interesting to log in and see other people chipping away along with you. We haven't found out just "what's inside the cube" yet, but if you want to see how the game is going, it's worth logging in before all of the chipping away is done.

In this article: badger, curiosity, developers, game, gaming, iOS, iPad, iPhone, update, whats in the box, WhatsInTheBox
All products recommended by Engadget are selected by our editorial team, independent of our parent company. Some of our stories include affiliate links. If you buy something through one of these links, we may earn an affiliate commission.