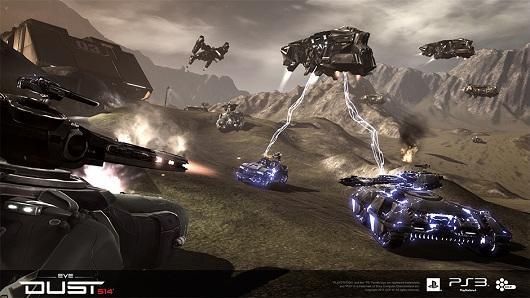 Pretty much everybody likes being rewarded, and it's safe to say that gamers are more or less at the heart of the group of people who like rewards. So let's talk about rewards in DUST 514. Players can earn three things from battle: money, skill points, and salvage.

You'll earn ISK, the storied EVE currency, in every battle you fight. Every mercenary will receive basic compensation for fighting; the more you fight, the more of this basic reward money you'll get. Teams will earn rewards based on the value of items destroyed, and that money pool will be divided among team members based on time spent in the battle. Everyone will also receive a monetary reward based on war points earned in a battle. War points will be converted to skill points, which are used to improve your your abilities. Finally, players have the chance to receive salvage items off a loot table. In time, players will be able to equip modules to influence their chances of higher-quality loot.
In this article: ccp, ccp-games, console, dust, dust-514, eve, eve-online, fps, game-mechanics, loot, mechanic, mmofps, playstation, playstation-3, ps3, reward, salvage, sandbox, sci-fi, shooter, skill-points
All products recommended by Engadget are selected by our editorial team, independent of our parent company. Some of our stories include affiliate links. If you buy something through one of these links, we may earn an affiliate commission.