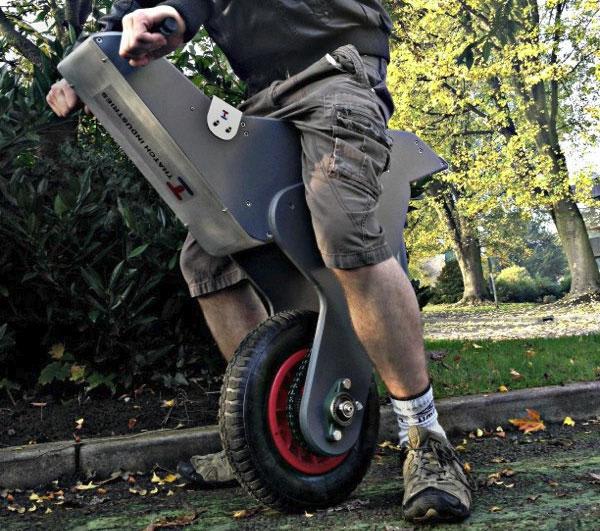 On the whim of a coin flip, Nick Thatcher once decided between building a homemade Segway, or a self balancing unicycle. Even though the powers of fate chose the former, Thatcher's thirst to build wasn't quenched -- he built the one-wheeled scooter anyway. The Raptor looks a lot like a Ryno unicycle built from spare parts -- a chain driven wheelbarrow wheel powered by a 350w geared motor, a pair of batteries wired in series, some PVC and polycarbonate, an IMU gyro and an Arduino UNO -- all hobbled together to form a one-wheeled electric mount. Thatcher says the scooter can push 10mph safely, but faster speeds tend to outpace the gyro's corrective efforts. Still, the bike promises between 90-120 minutes of face-plant free fun, provided the rider is at least a little balanced. The motorized unicycle isn't for sale, but peek on over to Thatch Industries for a parts list, or scoot on past the break to see the bike in action.

In this article: arduino, Arduino UNO, ArduinoUno, home built, home made, HomeBuilt, HomeMade, unicycle
All products recommended by Engadget are selected by our editorial team, independent of our parent company. Some of our stories include affiliate links. If you buy something through one of these links, we may earn an affiliate commission.