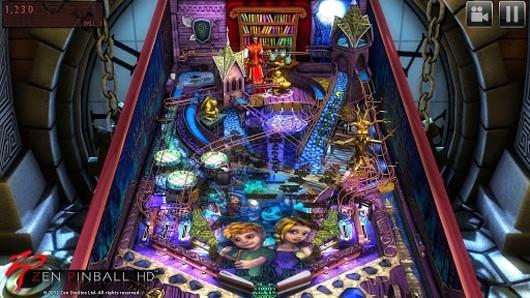 The folks at Zen Studios will not be content until their digital pinball wares exist on every platform known to man. Today the developer lets loose Zen Pinball HD onto the Google Play store, a free download for Android 3.0 devices and up.

Zen Pinball HD includes the "Sorcerer's Lair" table gratis – within the app, you may purchase up to 15 additional tables through micro-transactions, including selections from Zen Studios' lauded Marvel Pinball series of tables. In fact, the developer is offering a special sale price for each of those Marvel tables over the next week: $.99 each. You don't have to be a billionaire playboy to appreciate a good bargain.
Show full PR text
Zen Pinball HD™ Now Available on Google Play™

To celebrate the release of Zen Pinball HD, all Marvel themed pinball tables will be on sale for $0.99 for the first week of release!

Zen Pinball HD is a free pinball platform download featuring a mix of Zen's original pinball designs and the hugely popular Marvel Pinball, and will feature 15 tables at launch. All players are invited to download and play risk free – downloading Zen Pinball HD scores a FREE copy of Sorcerer's Lair (no strings attached). Zen Studios will support Zen Pinball HD on Google Play with frequent table releases which can be purchased individually as DLC.

About Zen Studios
Zen Studios is a global producer and digital publisher of interactive entertainment software for all leading game platforms including Microsoft Xbox 360®, PlayStation®3 computer entertainment system, PSP® (PlayStation®Portable) system, Nintendo DS™, Nintendo 3DS™, Wii U™, iTunes App®Store, Mac App®Store and Google Play™. The company is headquartered in Budapest, Hungary with offices in North America. Zen Studios has worked with some of the largest intellectual properties in the videogame industry, including Capcom's Street Fighter, Tecmo's Ninja Gaiden, PopCap Games' Plants vs. Zombies, and Marvel Entertainment. Zen's Pinball FX2 franchise on Xbox LIVE® Arcade is one of the most popular titles on the platform, has garnered numerous awards, and was named the best selling game of 2011. Zen Studios is hard at work on two new original titles, CastleStorm and KickBeat, both scheduled for release in 2013. For more information about Zen Studios, please visit www.zenstudios.com
In this article: android, google-play, mobile, Zen-Pinball, zen-pinball-hd, zen-studios
All products recommended by Engadget are selected by our editorial team, independent of our parent company. Some of our stories include affiliate links. If you buy something through one of these links, we may earn an affiliate commission.