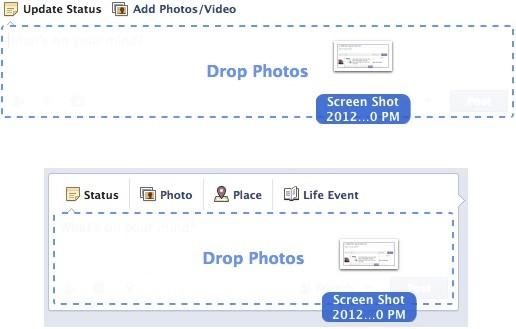 Anyone who's returned from an event with a virtual armful of photos may have been frustrated with Facebook's upload interface, which until now has involved a less-than-intuitive file browser. The company is quietly solving that problem: an update pushing out to individual users lets them drag-and-drop photos into a new post, like we've seen on other social networks, and to a newly streamlined Messages format that's rolling out at the same time. A much smaller circle is seeing a second update. Facebook has confirmed to ABC News that it's conducting limited trials of an updated Timeline that moves the news feed to a single column, replaces the thumbnail navigation with simpler-looking tabs and makes all profile page information available through scrolling. A spokesperson wouldn't say if or when the new Timeline would reach the wider public, but history points to "when" being more likely. They did however mention that the new privacy shortcuts, activity log and untagging tool would be going live for all users starting tonight, and we've already seen them pop up on some of our accounts.

In this article: DragAndDrop, facebook, internet, photos, privacy, socialnetwork, SocialNetworking, timeline, upload
All products recommended by Engadget are selected by our editorial team, independent of our parent company. Some of our stories include affiliate links. If you buy something through one of these links, we may earn an affiliate commission.