EE's new broadband router is a 4G MiFi for the home

FreedomPop jumps to LTE, lets you run out of free data faster than ever 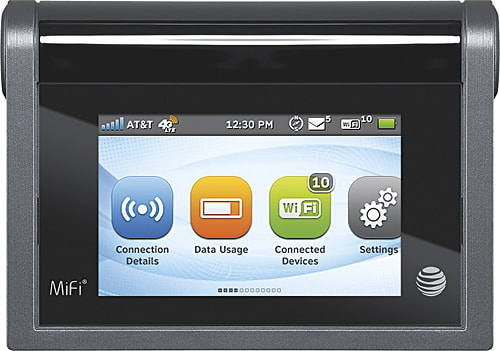 There are two factors that are of the utmost importance when it comes to choosing mobile hotspots: speed and battery life. Further down the list is portability, with hardware design ranking even lower. So the idea of a touchscreen MiFi struck us as a ridiculous luxury, the sort of thing we'd find in a SkyMall catalog. This is why we were intrigued by the MiFi Liberate, Novatel Wireless's first-ever 4G LTE MiFi with a built-in touchscreen. While it might seem like a gimmick, the interface does, in fact, provide quick access to vital stats like data usage. Novatel wasn't content to leave it at that, though: the Liberate has features we would never dream of adding to a MiFi, including media streaming, GPS and even a basic messaging app. Fortunately, the addition of such features don't inflate the price: it's available for $50 with a new two-year agreement with AT&T. How well does it all work? Join us after the break for our review. The MiFi Liberate is a fast and long-lasting mobile LTE hotspot from AT&T, but its unreliable touchscreen encourages us to either opt for a less-fancy MiFi or tether to a smartphone instead.

How would you rate the Liberate?
We want to hear what you think. Post a quick review now to join the conversation!
Write a review

Out of the box, the Liberate looks almost like a miniature Magic Trackpad thanks to its wedged profile and wide surface area. Measuring 99.5 x 73.1 x 8.8mm and weighing in at 120 grams (4.05 x 2.88 x 0.34 inches, 4.26 ounces), it's undeniably chunky, and is quite a bit larger and heavier than past MiFis. Still, it's perhaps the best-looking MiFi yet, with sharp gray edges and a glossy black exterior. On the left side of the battery cylinder is the power button, while the micro-USB port sits on the right. There's a Reset pinhole on the back, along with a flap covering the microSD slot, which can accommodate cards as large as 32GB. Inside the aforementioned enclosure is a 2,900mAh lithium-ion battery.

The star attraction, of course, is that 2.8-inch color TFT touchscreen. It's not a particularly striking display, what with its modest 400 x 240 resolution and shallow viewing angles. Also, while it's a capacitive panel, the responsiveness here leaves much to be desired. We occasionally had to swipe at the display several times before it would react, and we encountered quite a few screen refresh hiccups when scrolling through lists. It also takes a second for the internal accelerometer to rotate the display when we flip the device upside down. Obviously, we're willing to give it a bit of slack due to the secondary importance of a touchscreen on a MiFi, but given that it's the device's marquee feature, we expected more than just a passable attempt.

Setting up the Liberate is fairly painless. Simply pull the tab that separates the battery connection, power it up, and you'll be presented with a handy setup wizard that lets you know the SSID along with the WPA encrypted password. Don't worry if you forget it; just launch the connection details app to get a look at it again. You can also change the password by going to a special website, which is a nice step up security-wise compared to other MiFis with static passwords.

The Liberate runs on a proprietary Linux platform with a limited set of apps and features. Yet the fact that there are apps on a MiFi at all is pretty exceptional. A status bar tops off the interface, which is comprised of 10 shortcut icons that you can navigate by scrolling horizontally across the screen. With a tap of the finger, you can discover connection details, data usage and a list of connected devices. We found this ability to quickly check data usage quite useful, especially as AT&T does enforce a monthly data cap of 5GB per individual user.

Curiously, the Liberate can receive text messages, but you can't send any due to the lack of a keyboard. Thus, the messaging feature here is mostly limited to service alerts from AT&T -- or, you know, the occasional errant text message. The lack of two-way communication feels like an oversight, and it does highlight the weirdness of having messaging on a MiFi at all. As we mentioned earlier, the Liberate is unique in that it can act as a sort of DLNA or media streaming server thanks to its microSD card slot. Load up your favorite media on the card, head to the browser-based console on whatever device you're using and start streaming those files. You can also stream the music directly to a DLNA-capable device by selecting the Liberate from that item's DLNA interface. We tried it out on both an iPad and a laptop, and it worked well enough; we experienced no buffering or hiccups. As neat as it is, we wonder if it's truly necessary -- we're hard-pressed to think of a scenario where a smartphone or a tablet wouldn't do the same job.

Last but not least, the Liberate adds GPS to any device that happens to not have this feature. We connected the Liberate to a Macbook Air and indeed, it pinpointed our location accurately on the map, right down to which side of the street we were on. Again, most smartphones have GPS these days so this has rather limited functionality, but it's there if you want it.

A mobile hotspot is useless without solid performance, so it's fortunate that the Liberate actually fares quite well. We connected a tablet, a smartphone and a laptop to it for a whole day and were consistently pulling LTE speeds of around 15 Mbps down and 8 Mbps up with the Liberate getting about three bars of signal strength. We managed to have about 10 to 20 browser tabs open simultaneously and performance didn't take much of a hit at all. Of course, speed can vary depending on location. In the Potrero Hill district of San Francisco, performance dipped by a couple of points on average, while we suffered a five-point loss in the Mission district where the signal strength sometimes dropped to one to two bars.

We have to say we're really pleased with the Liberate's battery life. After about eight hours of constant use (we had the computer hooked up to IRC and both the smartphone and tablet had push notifications turned on), battery percentage barely budged past the 80 percent mark. We also left it connected overnight and it stayed alive for almost 24 hours on idle. Novatel rates Liberate's battery life as up to 11 hours, and right now, we're inclined to believe it.

The Liberate is one of two mobile hotspots available from AT&T; the other is the Elevate 4G from Sierra Wireless. The Elevate also offers 4G LTE speeds along with a microSD card slot, but it only lets you connect up to five devices while the Liberate expands that to 10 devices. Instead of a touchscreen and a 2,900mAh battery, the Elevate has a simple 1.77-inch LCD plus a 1,800 mAh battery rated for up to five hours. It's also considerably cheaper than the Liberate at only $1 with a two-year agreement. While we lament the Elevate's poorer battery life, it's probably the better deal if you don't need the Liberate's extraneous features. As for the data plan, AT&T offers a set price for mobile hotspots: you get a 5GB per month for $50 a month.

If you're not tied to AT&T, Verizon might have even better options with either the Jetpack MiFi 4620L or the ZTE-built Jetpack 890L. The MiFi 4620L looks and feels like a traditional MiFi with only the most basic of information on its OLED display, while the Jetpack 890L has a sleeker design with a larger OLED. Both offer 4G LTE, the ability to connect up to 10 devices, receive SMS usage alerts and are compatible with global networks. The MiFi has a rated battery life of 10 hours, while the Jetpack 890L goes up to five, and are priced at $50 and $20 respectively after a two-year contract. Verizon's data plans are definitely more varied than AT&T's: you can select one of five different monthly plans: 4GB for $30 a month, 6GB for $40, 8GB for $50, 10GB for $60 or 12GB for $70. Our personal preference would be for Verizon's MiFi 4620L due to the flexibility for more data and its simple and familiar interface.

As far as its core functions go, the MiFi Liberate delivers on its promise. It really is a solid mobile hotspot with decent LTE speeds and excellent battery life. The ability to connect up to 10 devices is great, and it has a fair price of $50 after a two-year agreement with AT&T. Still, it's not without faults. Though the touchscreen did provide quick access to valuable connection information, we wonder if it was overkill -- a simple LCD like the one on the Elevate would probably have sufficed. The touchscreen itself was also unpleasant to use due to poor responsiveness. Features like messaging, media streaming and GPS are alright, we suppose -- there's no harm in having them -- but they do seem unnecessary. In the end, the MiFi Liberate is a decent purchase if you need a mobile hotspot. And if you want a hotspot that's also a touchscreen device with extra fancy features, you're better off using your smartphone instead.

In this article: mifi, MiFi Liberate, MifiLiberate, mobilepostcross, novatel, NovatelWireless, review
All products recommended by Engadget are selected by our editorial team, independent of our parent company. Some of our stories include affiliate links. If you buy something through one of these links, we may earn an affiliate commission.