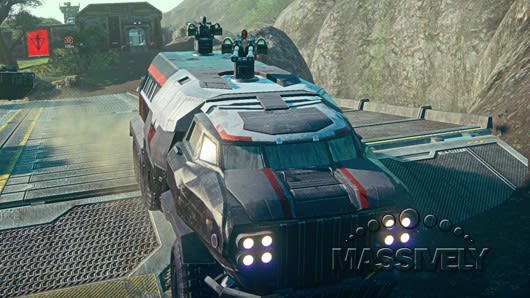 Would you believe that 70% of DC Universe Online's revenue comes from the PlayStation 3 version of the game? According to the UK version of the official PlayStation magazine, the superhero title and Sony Online Entertainment's Free Realms could possibly be joined on the PS3 by PlanetSide 2 in the future.

When asked directly about the possibility of the new sci-fi MMOFPS showing up on a console, SOE president John Smedley offered an artful deflection. "What I'd say is -- SOE has proven that we can bring our games to the PS3, and it's fair to say that we've got some other stuff out there cooking. I can't tell you what platforms it's for, but we're really excited about it."

[Update: We have corrected the 70% figure quoted directly from PlayStation magazine. According to SOE, Smedley intended to say that the percentage refers to DCUO's revenue, not SOE's revenue as a whole.]
Via: MCV
Source: Official PS Mag
Coverage: Official site
In this article: browser, browser-based, console, consoles, dc-universe, dc-universe-online, dcuo, f2p, fps, fr, free-realms, free-to-play, john-smedley, kid-friendly, kids, kids-mmo, mmo-shooter, mmofps, planetside, planetside-2, playstation-3, playstation3, ps2, ps3, sandbox, sci-fi, shooter, soe, sony, sony-online-entertainment, superhero, superheroes
All products recommended by Engadget are selected by our editorial team, independent of our parent company. Some of our stories include affiliate links. If you buy something through one of these links, we may earn an affiliate commission.