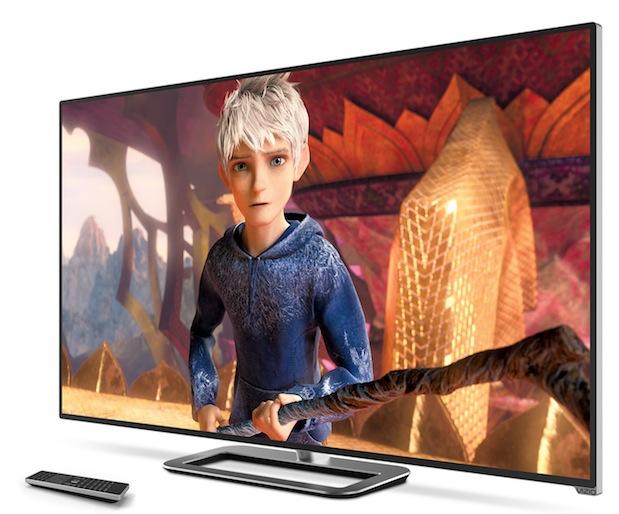 Just as we expected, 4K TVs are all the rage here at CES 2013 and naturally Vizio won't be left out. Among its 2013 lineup of LCD HDTVs is a new top of the line XVT-Series of Ultra HDTVs at 55-, 65- and 70-inches. The XVT551d, 651d and 701D don't have much in the way of prices or release dates, but the company claims it will "bring the expensive new technology to mainstream consumers." In the more accessible realm however are its M-Series displays, which will for the first time this year offer a universal backlit remote connected by WiFi Direct. Thanks to its connected remote, Vizio claims it will be able to control the entire home theater without the usual nagging setup process.

There are two M-Series lineups, the one with Theater 3D ranges in size from 50-inches to 80-inches, and in price from $849 to $4,499, while the models without max out at 47-inches and $699. Check below for a press release with all of the prices and specs plus a shot of that remote, although all we know about a release is that they'll be arriving "later this year." VIZIO's new M-Series Razor LED Smart TVs are the must-have centerpieces for today's modern families. The all-new M-Series signature design in screen sizes of 32" (M321i), 40" (M401i), 47" (M471i), 50" (M501d), 55" (M551d), 60" (M601d), 65" (M651d), 70" (M701d) and 80" (M801d),pair superior picture quality with an ultra-slim frame for a more immersive viewing experience. The ultra-thin bezels of the M-Series virtually vanish next to the near edge-to-edge glass screen for a signature look that updates any room's appearance. Unique interior metal construction in the base and neck adds stability while a beautifully finished exterior complements the design and helps set the new standard for affordable HDTV luxury.

"The M-Series family utilizes a blend of thoughtful design detailing, minimalist construction and premium materials to create a line of HDTVs consumers will be proud to showcase in their homes," said Scott McManigal, VIZIO VP of Design. "The sleek, near bezel-free design reduces distractions and enhances the rich picture quality allowing for a superior all-picture viewing experience."

"The new VIZIO M-Series line-up offers consumers a better entertainment experience with a clean, industrial design that now matches the superior picture quality and great Smart TV experience we are known for," said Matt McRae, VIZIO Chief Technology Officer. "The M-Series line is the perfect combination of leading technologies, highlighted by the easiest out-of-the-box experience, most popular TV apps on the market and an immersive, all picture viewing experience."

In addition to an enhanced line of M-Series Razor LED Smart HDTVs, VIZIO will also be unveiling its first Ultra HDTV offerings this year at CES. With four-times the resolution of Full HD 1080p, the premium XVT-Series Ultra HD Razor LED Smart TVs with Theater 3D offer the ultimate in resolution and picture quality. VIZIO will launch the 55" (XVT551d), 65" (XVT651d) and 70" (XVT701d) Ultra HD units later this year, making it one of the first technology innovators to bring the expensive new technology to mainstream consumers.

"As content creators continue to push the limits to produce ever-increasingly rich and intricate worlds for their stories, we're excited to be one of the first major brands to bring premium, Ultra HD resolution into the home," said Matt McRae, VIZIO Chief Technology Officer. "Ultra HD is the latest must-have upgrade for the home theater, giving discerning fans of our flagship XVT-Series access to cutting-edge technologies and an unprecedented high definition picture."

While the M- and XVT-Series will be unveiled at CES and available later in the year, VIZIO's popular entry-level E-Series line-up is available now and offers consumers an all-LED2 collection made affordable for every household. Bringing superb picture quality to consumers at a great value, the E-Series HDTVs have already seen great success at retail with large screen sizes of 70" (E701i), 65" (E650i), 60" (E601i) and 55" (E551i), as well as smaller units in 50" (E500i and E500d), 42" (E420d), 39" (E390i), 29" (E291i), 24" (E241i) and 22" (E221) available to consumers. The sleek, slim-frame LED product line offers advanced local dimming technology on 42" screens and above, SRS StudioSound HD™, a DTS technology, for clear audio and more HDMI inputs when compared to competitive brands, allowing for expanded entertainment options.

VIZIO's new 2013 HDTV collection will be on display at 2013 CES at the Wynn Hotel's Mouton Ballroom by appointment only. The M-Series units will be available later this year and additional details on the XVT-Series Ultra HD Razor LED Smart TVs with Theater 3D to be announced closer to commercial availability. Consumers can find the new all-LED E-Series line both in-store and online through key retailers such as Amazon, Best Buy, Costco, Sam's Club, Target, VIZIO.com and Walmart. More information on VIZIO's CES announcements can be found at VIZIO.com/CES.

VIZIO, Inc. is headquartered in Irvine, California. In Q2 2007, VIZIO skyrocketed to the top by becoming the #1 shipping brand of flat panel HDTVs in North America and in Q3 2007 became the first American brand in over a decade to lead in U.S. LCD HDTV shipments. Since 2007 VIZIO LCD HDTV shipments remain in the top ranks in the U.S. and were #1 for the total year in 2009 and 2010. In Q4 2012, VIZIO became America's #1 60+ inch HDTV company based on units sold. VIZIO is the #1 Sound Bar Company and is a top rated sound bar brand 2-years running by leading consumer publications. As VIZIO celebrates its 10-Year Anniversary, it remains committed to what it does best, focus on the consumer to deliver visionary products at a great value. VIZIO offers a broad range of award winning consumer electronics that now include PCs and mobility products. VIZIO's products are found at Amazon, Best Buy, BJ's Wholesale, Costco Wholesale, Sam's Club, Target, Walmart and other retailers nationwide. VIZIO has won numerous awards including a #1 ranking in the Inc. 500 for Top Companies in Computers and Electronics and made the lists of Ad Age's Hottest Brands, CNET's Editor's Choice, CNET Best of CES 2011 - Television, Home Theater Magazine's Top Picks, Good Housekeeping's Best Big-Screens, PC World's Best Buy and Popular Mechanics Editor's Choice among many other prestigious honors. For more information, please call 888-VIZIOCE or visit www.VIZIO.com.

© 2013 VIZIO,Inc. The V, VIZIO, Thin + Light and all names, logos and phrases are registered or unregistered trademarks of VIZIO, Inc. All other trademarks are the property of their respective owners. All rights reserved.

3 J.D. Power and Associates 2012 High Definition Television (HDTV) Satisfaction Report. Report based on responses from 1,009 consumers measuring 8 brands and measures opinions of consumers who purchased an HDTV in the last 12 months. Proprietary study results are based on experiences and perceptions of consumers surveyed August 2012. Your experiences may vary. Visit www.jdpower.com.

In this article: 4k, hdpostcross, lcd, led, m-series, uhdtv, UltraHD, universalremote, vizio, xvt, XVT551d, XVT651d, XVT701d
All products recommended by Engadget are selected by our editorial team, independent of our parent company. Some of our stories include affiliate links. If you buy something through one of these links, we may earn an affiliate commission.