Jam for iOS hopes to be 'Instagram for music'

Obama, Romney get chiptuned in battle for presidential seat 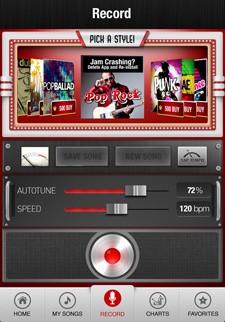 Most of the apps on display in Macworld/iWorld 2013's "Appalooza" annex are of the productivity variety, but that doesn't mean there isn't some fun stuff to be found. One that caught my eye was Jam from Australian developer DreamWalk Mobile.

Launched two weeks ago on the App Store, it's a free music-creation app for iPhone and iPod touch with a unique hook: You sing -- not even especially well, even -- and the app auto-tunes you and creates an original backing track, then mixes it all down into something you can share on Facebook.

The app, which has seen about 19,000 songs shared to date, came from the developer's desire to take an Instagram-style approach to music creation. That is, improving the source material -- in this case your voice, with "filters" replaced by auto-tuning -- and giving you a means to share the results with friends.

The backing tracks it adds to your vocals are generated from original loops and samples recorded in-studio by Jam's developers. They fall into several musical genes, including pop, rock and reggae. Only the pop rock genre comes pre-installed; others are available as US$0.99 in-app purchases. In an interesting twist, it's possible to buy the add-on genres without spending actual money. You can actually earn in-game currency in the form of "royalties" from others listening to and liking you songs, and these virtual funds can then be used in lieu of real money for the IAPs.

We've been playing around with the app a bit since our demo and have made a few little ditties this far, mostly about our co-workers and cats. It's a clever app for sure, and you can't really beat the price. Of course, whether it'll achieve its creators' Instagram-level aspirations remains to be seen, but it's nevertheless a fun diversion with some potential.

In this article: autotune, features, iOS, iPhone, jam, music, songs
All products recommended by Engadget are selected by our editorial team, independent of our parent company. Some of our stories include affiliate links. If you buy something through one of these links, we may earn an affiliate commission.