Latest in After burner climax

Sega's After Burner Climax flying over to iOS 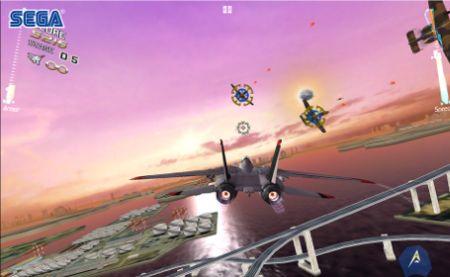 After Burner Climax was originally an arcade title, part of the old After Burner series (that was installed in an actual sit-in unit that spun around as you were flying -- pretty neat!). The title made the leap to Xbox Live Arcade and PSN a few years ago, and now Sega has released this version for iOS, available now on the App Store.

Unfortunately, without all of the arcade bells and whistles, this version feels just a little bit flat -- it's probably meant more for nostalgic Sega fans than anyone else. But the graphics are still very impressive. You choose a jet, pick Arcade, Score Attack, or Climax modes (Climax is a special power that allows you to take down multiple enemies at the same time), and then get flying, using virtual controls or tilt to move your aiming reticule around. The shooting game is pretty shallow, but it's definitely colorful and fun. Fans of games like the Sky Gamblers series may be a little disappointed that you basically can just fly back and forth (and barrel roll, of course), but this is an arcade title, not a simulation title, so the goal is just to be flashy and exciting, and After Burner Climax does that.

The game also brings in some really excellent features, including HDMI and Airplay support. This isn't a half-considered port -- Sega really did an excellent job in bringing this game over to iOS.

I really enjoy After Burner Climax. It's definitely an arcade game, with all of the shallowness that entails. But it's fast and fun, and it's very nice to have a version of the old arcade favorite available on my phone whenever I want to jump in and play. Those who favor real flying will have to look elsewhere, but if you just want to shoot down some tangos while flying at high speed, After Burner Climax is available now for US$1.99.

In this article: after burner climax, AfterBurnerClimax, arcade, daily app, daily iphone app, DailyIphoneApp, iOS, iPad, iPhone, newsletter, port, release, review, sega
All products recommended by Engadget are selected by our editorial team, independent of our parent company. Some of our stories include affiliate links. If you buy something through one of these links, we may earn an affiliate commission.