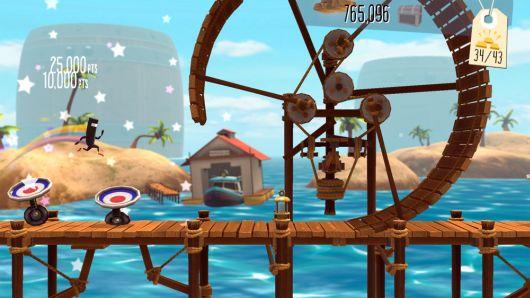 Gaijin Games' Runner2: Future Legend of Rhythm Alien sequel was submitted to its various platforms earlier this month, but we now have official dates and prices for the title, courtesy of Gaijin's co-founder Alex Neuse himself. CommanderVideo will start his run on the Wii U and Steam (for PC, Mac, and Linux) tomorrow, February 26, and then be available on Xbox Live on Wednesday of this week, February 27.

The PSN, iOS, and Vita releases are coming later: Neuse says "hopefully March 5" for the PSN release, "but Early March for sure!" iOS and Vita versions are due out sometime this summer. The game will be $14.99 no matter what platform you buy it on, and Neuse notes that there's still a few hours for a Steam preorder if you want the various bonuses and discounts. If you've been waiting a long time to hear the voice of Charles Martinet narrate the long-awaited BIT.TRIP sequel, your wait is almost over.

Update: March 5 on PSN is confirmed, according to Gaijin's other co-founder, Mike Roush.
In this article: alex-neuse, dated, dates, gaijin-games, ios, microsoft, nintendo, pc, price, ps3, psn, psvita, release, release-date, runner-2, runner-2-future-legend-of-rhythm-alien, runner2, wii-u, xbox, xbox-live
All products recommended by Engadget are selected by our editorial team, independent of our parent company. Some of our stories include affiliate links. If you buy something through one of these links, we may earn an affiliate commission.