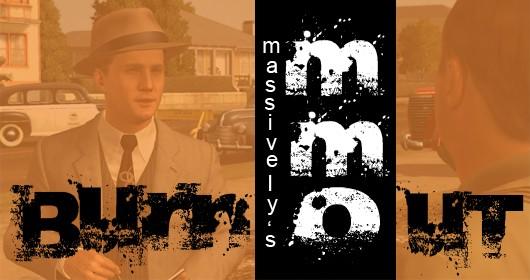 I don't know about you, but I really wanted to like L.A. Noire at release. I mean, come on. It was Rockstar. It was also a gigantic open playfield based on the 1947 incarnation of a real-life town that's spilling over with sordid, sultry characters all looking to make their mark on post-World War II America.

Alas, something about the title just didn't jell with me at launch. In fact, I didn't even finish the original campaign on my Xbox 360, which is rare when it comes to personal gaming habits. Equally rare is the occasion when I repurchase a game that I didn't really like on a different platform, but that's what I did thanks to yet another ridiculous Steam sale this past December.

My second tour of duty as hard-boiled detective Cole Phelps has been decidedly more enjoyable than my first, and while L.A. Noire is still a flawed video game in some respects, it makes for an engaging vacation from massively multiplayer convention while riffing on some of the genre's new-school charms.

In an odd bit of happenstance, I've recently been playing some Star Wars: The Old Republic in addition to working my way through my Steam backlog, and if there's an MMO out there that reminds me a lot of L.A. Noire (or vice versa), it's SWTOR. I'm about to ding 30 on my second Smuggler character, and I've yet to talk to another player, let alone group with one. Sure, the game has raids and PvP content, but the meat-and-potatoes is the solo grind set off by the story cutscenes, which is a pretty fair approximation of the L.A. Noire experience minus a lightsaber or two.

Well, OK, there are fewer RPG stats and more third-person action whoopassery in L.A. Noire, but you know what I mean. Despite technically being an open-world Rockstar title, the game is very much a modern-day A-to-B treadmill experience. Or at least, I felt compelled to play it that way. There are side quests, of course, and you can explore to your heart's content, unlock landmarks and classic cars for various achievements, and answer 30-odd dispatch calls for fun and progression-driven profit.

There was always this nagging notion that I needed to get back to the narrative and advance through the game, though, and I don't know whether I was projecting my current MMO sensibilities onto the proceedings or it was in fact designed to be hurry-up-and-finish. I suspect a bit of both.

It was also a curious play experience because my need to advance the narrative wasn't really driven by empathy for Phelps or his many colleagues. To be honest, most of the characters in L.A. Noire are fairly unlikable folk. Phelps has his moments, but overall he left me cold and detached rather than completely invested like a John Marston, a Carl Johnson, or a Niko Bellic.

The 20-odd hours I spent with the game were more about the achiever in me rising up and cracking the progression whip, which was totally unlike my experience in past Rockstar single-player sandboxes as well as the sublime San Andreas multiplayer mod.

Ultimately, though, the main problem I have with L.A. Noire is that it is more of a movie than a game. The cinematic camera takes over quite a lot, and while you can certainly direct Cole's movements and work your way through dozens of dialogue trees while questioning suspects, there's an inevitability to the whole enterprise, which is somewhat jarring when compared with Rockstar's previous efforts. It's more along the lines of a Heavy Rain than a Red Read Redemption or a Grand Theft Auto, which is OK once you adjust your expectations I suppose.

All of that aside, the world of L.A. Noire itself is a wonder, from the dapper suits and hats on all of the cops and robbers to the cable cars and vintage rides crowding the streets of a sprawling, somewhat familiar Los Angeles that segues from urban chic to suburban paradise to post-war industrial decay every other block. I daresay that I spent more time hitting F11 than my trigger-finger left mouse button, which resulted in a screenshot folder bursting at the seams with 1,539 mementos.

I won't get into the story much here in case you've got any inclination to play through it. It most definitely lives up to the noire in the title, and it's competently voice-acted throughout, though Dr. Harlan Fontaine's syrupy southern drawl will cause actual southerners to cringe on occasion. The game's much-hyped facial recognition technology is an interesting sort of side show, and while it's definitely the industry's crowning achievement thus far in terms of realism, it still has plenty of uncanny valley moments.

At the end of the day, if you're a fan of Rockstar's previous work and you're looking for a single-player detour that still manages to feel a little bit like an MMO, L.A. Noire fits the bill. I did the whole alone-together bit while logged into my guild's Ventrilo server for most of my play sessions, and it was an enjoyable slightly-disconnected-but-not-really gaming experience that allowed for some socialization while toodling around on the game's achievement and side quest treadmill.

The price is certainly right on Steam nowadays, and if you can manage to catch it on sale as I did, you can grab all the extra DLC cases on the cheap, too. It's worth noting that the PC version is a console port, but in my estimation it's a pretty good one. I had no issues maneuvering Phelps or his many vehicles with WASD as opposed to an analog stick, and the game environment, the UI, and the menus looked every bit as spectacular on my monitor as they did on my television.

Burned out on MMOs? That's OK; there are tons of other titles out there featuring MMOish open worlds, progression, RPG mechanics, or a combination of all three. Massively's MMO Burnout turns a critical eye toward everything from AAA blockbusters to obscure indie gems, not to mention a healthy dose of the best mods.
In this article: alone-together, burnout, cole-phelps, featured, la-noire, mmo-alternatives, mmo-burnout, open-world, opinion, rockstar, single-player, story
All products recommended by Engadget are selected by our editorial team, independent of our parent company. Some of our stories include affiliate links. If you buy something through one of these links, we may earn an affiliate commission.