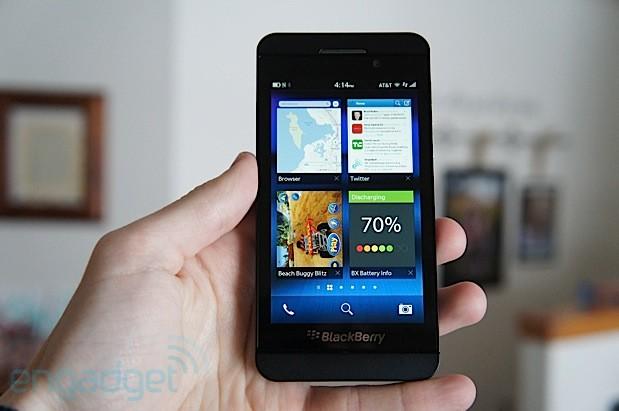 Time's up. I've now had a full month to call the BlackBerry Z10 my very own and use it as my everyday device. I've had the opportunity to use it in every likely scenario, including a nine-day trip to Spain for Mobile World Congress. Now comes the moment of truth: have I become a BlackBerry convert? Is the Z10 my new daily driver?

Unfortunately, it's not. But before the BlackBerry fan base breaks out the torches and forms mobs, this isn't a denunciation of the phone or its OS. Quite the opposite, in fact. I decided to pursue this experiment for a few reasons: it's the best way to learn a brand-new operating system, I genuinely am interested in how well it handles regular day-to-day use and a month gives me plenty of time to form a solid idea of the platform's potential and future. Is it possible to have a great deal of admiration for a phone while simultaneously rejecting it as my daily driver? Yes. After the break I sum up the highlights of BB10: what works, what doesn't and what simply needs a little nudge or two.

What works for me

Gestures. BB10's gestures are natural and intuitive. In the first week of my trial, I had become so accustomed to BB10's gesture-based UI that I started trying to wake Android devices by swiping up on the screen. Most gestures on BlackBerry 10 are easy and they give the platform a fair amount of uniqueness that you can't find on iOS or Android.

Active Frames. BlackBerry's multitasking performance is among the best (if not the best) I've used on any phone, as opening any running application is almost always an instantaneous transition -- even with graphics-heavy games. I also have a love / hate relationship with the Active Frames UI; quick access to my recent apps is nice, but having it take the form of a "home page" without any ability to customize it can be frustrating.

BlackBerry Peek. To be frank, my favorite notification method implemented on any mobile OS is the status bar on Android, mainly because it's easily accessible and navigable the vast majority of the time (it gets hidden in certain apps). That said, BlackBerry Peek is also a refreshing departure from standard notification systems; swipe up to "peek" at how many notifications you have, and swipe to the right if you want to view them. They're also easy to ignore if you so desire.

BlackBerry Hub. Although it's not perfect, Hub is the best implementation of a universal inbox I've used so far. Since it's built directly into the OS and has integrated nearly all of my preferred methods of communication, I can catch up on emails, texts and tweet mentions without exiting to different apps.

Emails. I enjoy the email experience on BB10... for the most part. I love having the option to lump my messages all together in a universal inbox or tackle them one account at a time. It handles attachments incredibly easily, HTML5 looks great and mail gets pushed to the inbox right away (I often receive emails on the Z10 before they arrive on my Mac).

I also appreciate that a conversation view is offered. But there's one critical flaw that I hope can be tweaked: even though I can go into a specific thread, each response in that thread is presented as an individual email, and there's no way to navigate through the entire conversation without first backing out to the thread list and then going back into the next response. iOS is structured in a similar way, but it offers navigation arrows on the top-right corner to let you quickly move through the entire thread.

The keyboard. This is BlackBerry's bread and butter, and the OS doesn't disappoint here -- at least, when it comes to performance. It's the best stock keyboard I've ever used. However, the inline word prediction feature, while really cool in theory, failed to increase my typing speed. I switched to the in-column view, in which you can choose from three words on the top of the keyboard, and was much happier.

Flash Player. In full disclosure, I'm not an avid user of Flash, but I do prefer at least having the option to use it when I need it. I'm happy that it can be manually turned on or off at any time, thus giving users actual choice. This is a solid competitive advantage for BlackBerry, even though I can't envision many people switching to a different OS just for Flash support.

Sideloading Android apps. Runtime for BlackBerry came through for me on a daily basis because it allowed me to use several Android apps to fill gaping holes in BB World (case in point: Flipboard). Don't worry; native apps will eventually come in to take care of that problem. The problem is, relying on Android ports as a workaround to support your ecosystem is not an ideal long-term solution. Sure, it may encourage a few more devs to think about writing apps for the platform, but it's not going to magically change the industry. Most users won't know or care to sideload apps, so BlackBerry has to work hard to make sure those users don't have to in order to get the best possible experience.

Updates. Before the first month was over, BlackBerry issued a significant update promising to improve power management for better battery life, low-light camera performance and third-party app performance. Given the horrible battery life I've experienced, I'm excited to give it a try; unfortunately, the update didn't arrive in enough time for me to give it a thorough test, so I'll have to report back later. However, a quick look at various BB forums indicates that it does a much better job at retaining a charge.

What needs some work

BlackBerry World. I'm not going to condemn a nascent ecosystem for its app selection. No market blossoms in the space of one month, and the reality is BlackBerry has actually done a fairly good job of making sure the right pieces were in place for BB10's launch -- at least, it's done better than any other first-edition platform. Most users (especially those on the enterprise / corporate side) will likely be satisfied with what's available in BB World, unless they absolutely need Netflix or Instagram.

There are a few areas of World itself that could use some improvement. It should check for (and install) updates automatically -- or at least make it an option, if not mandated. More filters are needed without diving deep into subcategories and other seldom-used lists. Lastly, with Android ports comprising 40 percent of World's app selection, each one should be specifically listed as such -- especially when they're paid apps.

Data monitoring. This needs the most work, since I still haven't found any way to monitor my data usage at all. I sorely missed this feature in Spain, because I had a pre-paid data cap and didn't want to run out in the middle of an important event. If BlackBerry doesn't come up with a solution, a third party needs to step up.

Maps. The native maps solution on BB10 is my least favorite of the major platforms. It's way too basic altogether, shunning important features like transit directions, walking options, offline maps, distance between two points, a bird's eye or Street View feature, more POIs and Zagat- / Yelp-style reviews. I preferred the Nokia Here web app; this speaks volumes to Here's impressive capabilities, but I shouldn't have to use it as a replacement to a platform's native maps app.

Using web apps. BlackBerry is using web apps as alternatives to a few native apps, and I hope this is only a short-term solution while the company cooks up other options. There are two examples of this practice that especially need attention: the Facebook app, which takes you into the browser for a large number of its services, and YouTube, which is just a shortcut to its home page. These options are better than nothing, but they fall far short when it comes to the user experience.

Tweakable settings. I like choice. If something doesn't work for me, it's nice to have the ability to tweak it so it does my bidding. Sadly, BB10 lacks a lot of these customizable settings in many core apps, such as the camera, music and video players, maps and more. This could be a symptom of being a first-edition OS, where many minor features end up on the cutting-room floor as the dev team focuses on getting the major stuff right, so hopefully these smaller things will be addressed in the next update.

While the Z10 won't be my daily driver, I can answer the questions I raised at the beginning of my experiment: does it fit my daily work flow? How does it hold up against its rivals? And does BlackBerry have a future? First, work flow: I was able to accomplish almost all of my daily work routine -- even when I was in Spain for nine days -- but a large chunk of it was only made possible by sideloading Android apps and finding other workarounds. Basically, I had to make a lot of compromises and do a lot of research in order to get it to function the way I needed, and many tasks became more time-intensive than they would have been on other platforms. I'm happy that these methods helped me get through the month unscathed, but ease of use, accessibility and speed are crucial to me.

Second, how does it hold up against its rivals? There are plenty of good qualities in BB10, but BlackBerry needs a hook -- in other words, iOS and Android users won't hop out of an ecosystem they're comfortable with unless there's a very clear reason to do so. The new and improved BlackBerry is the best first-edition OS I've ever used, but the true competitive advantages are few and far between: solid enterprise / BYOD support (areas in which iOS and Android are quickly catching up) and the BlackBerry Hub. BB10's gesture-based UI and built-in Flash Player get honorable mentions, but I can't see very many people making the jump on those features alone.

Again, this isn't a condemnation of the OS. After 30 days, I've discovered that I like the Z10 and the BlackBerry 10 OS a lot more than I had anticipated, and I believe it will be an ideal platform for a large number of power users, heavy communicators and corporate hotshots. It's just not the most ideal option for me right now. And as every major OS has done over time, it will evolve, add missing features and iron out the wrinkles (BlackBerry has already pushed out its first update, so it's off to a solid start). Which takes me to my final question: does BlackBerry have enough time to keep blossoming? The only way you can drive to your destination is to look forward, not at the car in the lane next to you; I believe BlackBerry is going in the right direction now, but it can't sit idly by and watch its competitors speed ahead again.

In this article: bb10, blackberry, blackberry z10, blackberry10, blackberryz10, bradberry, mobilepostcross
All products recommended by Engadget are selected by our editorial team, independent of our parent company. Some of our stories include affiliate links. If you buy something through one of these links, we may earn an affiliate commission.