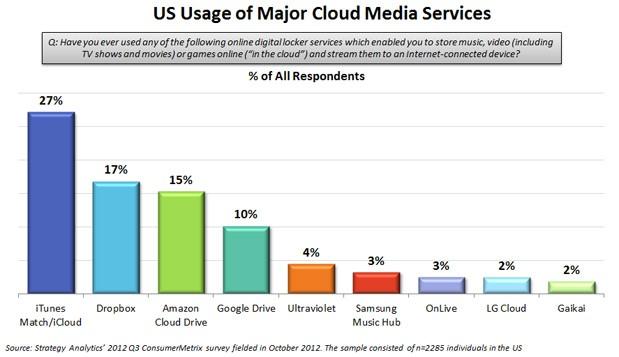 We often focus on market share for hardware, but cloud media services increasingly dictate our lives after the devices have reached our bags and pockets. Wouldn't it be nice to know who rules the online media landscape? According to Strategy Analytics' just-published study from the fall, it's Apple's iCloud and iTunes Match that are top dogs in the US at a combined 27 percent of usage -- a not entirely surprising lead when Apple has pushed hard on iCloud's media syncing since iOS 5, and has large swaths of market share in MP3 players and tablets, not just smartphones.

There's a considerably tougher fight involved for just about everyone else, however, including Google. Dropbox and Amazon Cloud Player are almost neck-and-neck at 17 and 15 percent respectively, while Google Drive holds just 10 percent. Music is clearly the driving force, Strategy Analytics says: when audio represents 45 percent of the content on a generic platform like Dropbox, companies ignore tunes at their own peril. Just don't confuse market share with absolute popularity. A full 55 percent of those asked hadn't used a cloud media service at all, which suggests that there's a long road to travel before we're all streaming and syncing our collections.

Barton concludes, "Although cloud storage is fast becoming a key pillar of digital platform strategies for the world's leading device manufacturers and digital content distributors, there's still a lot of work to do in educating consumers – particularly those over 45. With over half of consumers yet to use any consumer cloud based service, 2013 predictions for the 'year of the cloud' seem unrealistic. However given the market influence of the leading players pushing the concept, in particular Apple, Amazon, Google and Ultraviolet, I won't be surprised to see mainstream adoption and usage spike within the next two to three years in the key US market."

In this article: amazon, apple, cloud, dropbox, google, googledrive, googleplaymusic, icloud, itunesmatch, marketshare, storage, strategyanalytics, streaming
All products recommended by Engadget are selected by our editorial team, independent of our parent company. Some of our stories include affiliate links. If you buy something through one of these links, we may earn an affiliate commission.