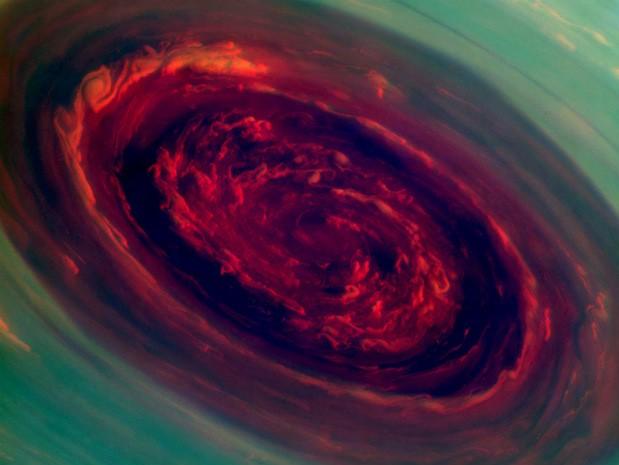 If the crashing sound of lightning striking Saturn wasn't enough to excite your inner-meteorologist, then perhaps footage of a raging extraterrestrial hurricane will win you over. After orbiting the ringed planet for nine years, NASA's Cassini probe has managed to snag video of a super storm on the celestial body's north pole. Cloaked by the darkness of winter, the hurricane's eye became visible as Saturn's northern hemisphere transitioned into spring. Unlike the tropical cyclones of Earth (see: Hurricane Katrina, Sandy and Irene), this furious typhoon has been spinning for several years and has winds that flow at speeds exceeding 300MPH. Further differentiating itself from our world's whirlwinds, this alien cyclone is locked to its planet's north pole and is fueled by small amounts of water vapor instead of an actual ocean. Completely in a category of its own, the hurricane's eye measures about 1,250 miles wide and is surrounded by fluffy white clouds the size of Texas. To see this Saturnian fury in all its glory, check out the video after the break and feel free to leave your gratuitous hurricane names in the comments below.

In this article: cassini, CassiniSpacecraft, hurricane, nasa, saturn, science, SpaceExploration, visualized
All products recommended by Engadget are selected by our editorial team, independent of our parent company. Some of our stories include affiliate links. If you buy something through one of these links, we may earn an affiliate commission.