We have truly entered the era of the quantified self. Editorials are shouting it from the rooftops, technologists are snickering "I told you so" and you, dear consumers, are just eating it up. If there's some sort of personal metric you'd like to monitor and view in a pretty little chart, there's a product out there to help you do it. Now, that doesn't necessarily reflect a mature market rather than a fleeting fad. But we'll say this: companies both big and small are offering a number of products for this growing niche and some have built their entire portfolio around a lineup of personal tracking devices. Fitbit is obviously one of those companies and, with the One, Zip and Aria WiFi scale already on the shelves, it's got a pretty robust set of options for those looking to turn their entire lives into a collection of infographics. With the Flex, though, it truly rounds out its offerings with a wearable band in the style of the Jawbone Up and Nike FuelBand.

There are, of course, a number of differences between all of these products -- not the least of which is price. At $100, the Flex undercuts its most direct competitors by at least $30. There's also support for Bluetooth 4.0, which delivers wireless syncing on both Android and iOS. The question is, does the Flex deliver enough at that price point to make it a clear choice?%Gallery-187569% 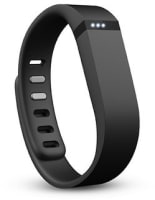 The design of the Fitbit Flex is the very definition of simplicity. And we don't mean that in a bad way. Some might say it's bland, but we like to think of it as tasteful. Understated. There's a bit of retro-futurism to the aesthetics here. In fact, it looks like something Dr. David Bowman Frank Poole might have worn while jogging around the Discovery One. (Editors note: as pointed out in the comments, it is in fact Frank Pool, not Dr. Bowman jogging around the spaceship in 2001: A Space Odyssey.) The entire band is made of matte plastic, in this case a gray-blue the company calls "Slate." The only interruptions along the sleek and simple body are the brushed-metal squircle you press to close it around your wrist and the thin, dark plastic window that exposes the lights on the tracker piece. It's quite a bit bulkier than the Up and there's a slight taper to the body, with it getting a bit thicker where the window is. But, the more watch-like design actually makes it more comfortable to wear than the Up, which constantly gets caught on things and scrapes against your laptop. If the Flex didn't need to be charged every few days, you could almost forget you were wearing it.

The design of the Fitbit Flex is the very definition of simplicity. And we don't mean that in a bad way.

The band itself is just that: a band. The tracker is actually a removable piece that slips inside the rubber strap. It's small, black and completely inconspicuous. One side has a sharp slope and a lightly etched Fitbit logo and the opposite end has three metal contacts used with the charging dongle. The only other external features are the five white lights along one edge, which shine through the window on top of the band. Unless you want to constantly have the app fired up, these will be your primary way of interacting with the Flex.

The accelerometer inside, meanwhile, doesn't just count your steps or measure how restless your sleep was; it also provides a way of controlling the device. Tap the module twice and the lights will tell you how close you are to your step goal; tap it five times to tell it when you're putting your head down to catch some shut-eye (and five times again when it's time to start your day).

It's a bit tricky to get the Fitbit to register five taps in a row to take it in and out of sleep mode -- especially first thing in the morning, when you're bleary-eyed and desperately want the silent alarm to stop vibrating. And, yes, there is an alarm on board, but unlike the one on the Up, it simply goes off at a predetermined time. Meaning, it doesn't actually wait until you're in a lighter stage of sleep. While the accelerometer is a bit fickle when it comes to controlling the Flex, we can't overstate the convenience of being able to glance at the band to track your progress towards a step goal. Each of the five lights represents 20 percent of your target number of steps (by default it's 10,000). When you reach that goal, the band vibrates and the LEDs do a little happy dance to congratulate you -- it's much more satisfying than plugging into a phone and waiting for it to sync.

The convenience of being able to track your progress towards a step goal on the band itself can't be overstated.

It's impressive enough that there's a battery able to get you an estimated five to seven days of use inside, along with the accelerometer, LEDs, motor and necessary processing power. But there's also a Bluetooth 4.0 radio and NFC hiding in this tiny wonder. Combine that with the included USB dongle or the updated mobile app and you can sync your activity, sleep and change your alarms without having to physically connect the Flex. It's one of our favorite features, especially on the few compatible Android handsets, which let you tap the phone on the wristband and automatically launch the Fitbit app and initiate a sync using NFC. Even if your phone isn't one of the currently compatible models (the Galaxy S III, S4 and Note II), the inclusion of NFC lets you quickly launch the app with a tap, though there will be no ability to sync.

As you'd expect, the Flex is also built to be quite indestructible. Fitbit bills it as water-resistant, not waterproof, so we wouldn't suggest you take it for a long dip in the ocean. That said, it survived plenty of showers and dishwashing sessions. While the tracker is rated to survive up to seven days of such abuse, we usually needed to give it a charge every five. Still, that's better than the FuelBand.

Like the Flex itself, Fitbit's mobile app is clean and simple. There are no extraneous colorful graphics or smiley-face avatars here -- just numbers, graphs and a few helpful icons on a gray background. Not much has changed since the update, delivered back in February. You navigate between sections from a drop-down in the upper-left-hand corner and can swipe through a few different panels on the various summary cards on the home screen. The dashboard gives you quick access to your alarms and food plan, while showing your progress towards various goals such as calories burned. Unfortunately there are a few features that would seem like a natural fit for simple-to-tap shortcuts, such as the ability to add to your food log, that are sadly missing.%Gallery-187570%

The app's two major shortcomings are sleep and food tracking. Various updates we downloaded during our review helped improve the sleep tracking, but even now it's inconsistent. It does provide a general sense of how long you slept, and how well, but you need to keep your expectations in check. For instance, I tend to be a very restless sleeper who wakes up multiple times during the night, but the Flex often failed to register my tossing and turning as "restless" sleep. In fact, on multiple occasions it failed to recognize that I was out of bed and active as being awake. One morning, it registered an extra four hours of sleep after I forgot to explicitly tell it I was awake, using that five-tap gesture. During those hours, I showered, made coffee, ate breakfast and worked on this review -- the Flex was none the wiser.

We're used to being disappointed by the sleep tracking on activity trackers -- consumer-grade actigraphy just hasn't proven very accurate. A bigger surprise is the calorie-tracking portion of the equation, which pulls from a rather weak food database. Fitbit simply can't compete with services like FatSecret and MyPlate from Livestrong in this field. Even Jawbone's slightly disappointing repository of nutritional data leaves Fitbit in the dust. More often than not, you'll have to select a generic option or settle on a brand that comes closest to the one you're looking for. Some major brands, like Goya, seem completely unrepresented. The lack of a quick shortcut for adding food to your log also means you're always at least three taps away from the meal search. You'll first have to open the drop-down menu in the app, select food and then tap the plus icon in the upper-right-hand corner. And there's no barcode scanner for simplifying the process of pulling up various pre-packaged products.

To go along with the debut of the Flex, Fitbit has also given its web interface a dramatic overhaul. The new dashboard is a series of customizable tiles that you can rearrange or remove to provide the information you want. Clicking on each tile pops up a card with more detailed information and an arrow at the bottom-right-hand corner takes you to the individual panes for each metric. Those dedicated panes still have the old design for the time being, but Fitbit says they'll soon be updated to match the almost Metro-like aesthetic.

The Flex is entering an increasingly crowded marketplace. Wrist-worn fitness trackers are a hot commodity right now and making your mark in the field is becoming quite difficult. But Fitbit might just have struck the right balance between price, convenience and simplicity. Some of its competitors certainly hold advantages over it in particular categories. For example, the Jawbone app, despite all of its half-baked features, certainly outclasses Fitbit's -- especially in the calorie-tracking department. And Nike's more robust display puts a lot more data at your fingertips. But the Flex manages to pack more features than the FuelBand, more convenience than the Up and undercuts both on price.

What Fitbit seems to have done is look at the rest of the fitness-tracking field, figure out what features have proven most successful and essential and then packed them in a surprisingly stylish and affordable package. At $100, the Flex isn't an impulse purchase considering its relatively niche appeal, but for those looking to pick up this particular type of lifestyle product, it's a solid choice. The social aspects of racking up Fuel points and Jawbone's more robust mobile app certainly have their appeal, but we'd say the Flex offers the most well-rounded experience, not to mention the best bang for your buck.