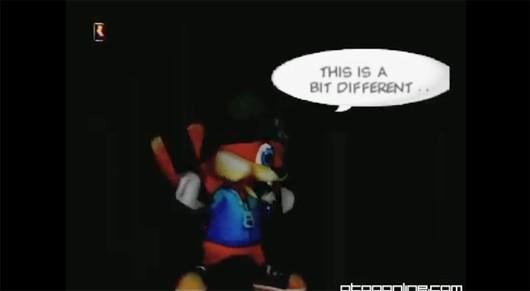 Conker's Bad Fur Day is one of the Nintendo 64's more infamous releases. Originally pitched as a family-friendly adventure in the vein of developer Rare's own Banjo-Kazooie, Conker's direction changed drastically during its development, resulting in an M-rated adventure featuring squirrel hangovers, frequent profanity, and opera-singing turd creatures.

Conker tested the limits of Nintendo's publishing guidelines, and while much of the game's salty content made it to store shelves unscathed, some scenes were changed or removed prior to the game's completion. A fan-driven fundraiser seeks to release an uncut beta version of Conker's Bad Fur Day to the public as a downloadable ROM image.

The debug footage above, captured by demo cartridge owner Borman, shows an uncut scene in which the Nazi-like Tediz are performing experimental surgery on a live squirrel soldier. Nintendo apparently decided that this little vignette pushed things too far, as the retail version of the cutscene plays out quite a bit differently. Additional differences between Borman's demo and the retail release have been noted, spurring fan demand for a ROM release.

Along with the promised ETCS demo build, Borman will also release a second debug version of Conker, along with PAL and NTSC beta versions of Rare's Perfect Dark, once his $2,500 funding goal is met.
In this article: beta, conker, conkers-bad-fur-day, n64, perfect-dark, rare
All products recommended by Engadget are selected by our editorial team, independent of our parent company. Some of our stories include affiliate links. If you buy something through one of these links, we may earn an affiliate commission.