Nokia's 5070 and 7088 for dudes and debutantes, respectively 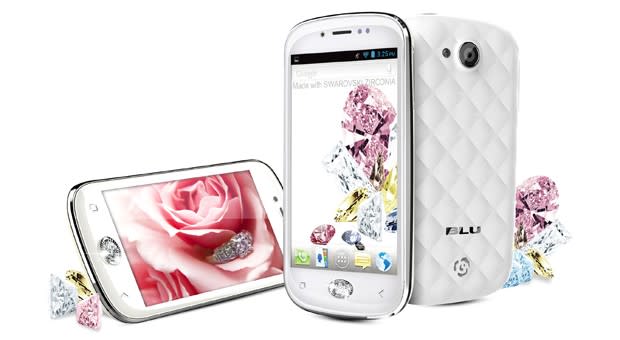 BLU Products: we like your value-packing smartphones, but we have to talk. Your just-shipped Amour is leaning a little too heavily on female stereotypes with its Swarovski zirconia home button, quilted back and luxury-themed take on Android 4.0. We'd rather you focus on the quite respectable budget phone inside. For $159, customers are getting a real bargain: there's a 4-inch WVGA screen, a dual-core MediaTek chip, dual SIMs with unlocked 3G, a 5MP rear camera and a front VGA shooter. That kind of bang for the buck can appeal to frugal buyers of all kinds, not just those replacing an HTC Rhyme.

BLU Products Announces the BLU Amour Smartphone, made with SWAROVSKI ZIRCONIA, to be displayed at JCK Las Vegas

The new fashionable smartphone will be on display at the JCK Las Vegas Show – the leading jewelry event in North America, May 31st- June 3rd at the Swarovski exhibit located at Shorelines, Level 2 booth in the Plumb Club Pavilion, PC-365 at the Mandalay Bay Convention Center.

"Swarovski's image of luxury and appeal is an ideal fit for the BLU Amour Smartphone which is exquisitely designed for modern women," said Samuel Ohev-Zion, CEO of BLU Products. "We wanted to provide a distinctive and remarkable device as an alternative for women who are at the center of attention – wherever they may be, and we believe we have done that – to the delight of our customers."

The BLU Amour features a 4-inch high resolution display with IPS technology that lets you enjoy the images on the screen, from any viewing angle without missing color intensity and clarity. With the Amour's 5.0 megapixel camera with LED flash, users can take brilliant photos and flawless portraits, as well as enjoy video chat from the front facing camera.

The device is powered by a 1GHz Dual Core processor for fast browsing, gaming and imaging, along with Android v4.0 OS, which makes keeping track of communications with friends and colleagues simple on social sites such as Facebook and Instagram. Jetsetters will delight, as the BLU Amour features an additional SIM card slot which enables the user to plug in another SIM card when traveling for full Dual-SIM support and functionality.

The BLU Amour has already started shipping, and will be available in the United States, unlocked – for any mobile network operator, through several online retailers such as Amazon.com for $159.00, followed by major retailers in Brazil, Mexico, and other Latin America countries.

In this article: amour, android, Blu Amour, BluAmour, bluproducts, dualsim, mediatek, minipost, mobilepostcross, mobilepostmini, mt6577, smartphone, swarovski, unlocked
All products recommended by Engadget are selected by our editorial team, independent of our parent company. Some of our stories include affiliate links. If you buy something through one of these links, we may earn an affiliate commission.