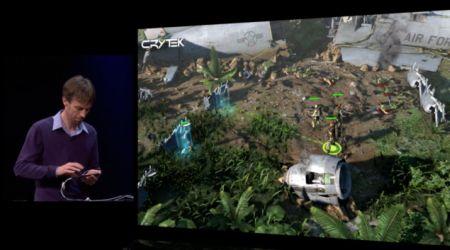 Crytek is the company behind the Crysis series of games, as well as the CryEngine game engine that powers them, and it's released a game on iOS before. Now, it looks like the AAA developer is planning to make a return to Apple's touchscreen platform, with a new game called The Collectibles (or The Collectables, depending on who you hear about it from). Last week at WWDC, Crytek showed off the new game during a panel, and as you can see above, the game looks like a top-down action title, probably a shooter of some description.

The other interesting thing you'll notice about the game is that the developer demoing it was using a controller. iOS 7, you'll remember, adds official Apple support for "Made for iPhone" controllers, and we've already seen this hardware leaking out into the world. There have already been a number of third-party controllers available for iPhone and iOS devices, but it looks like Apple is finally supporting buttons officially, and Crytek's game might be one of the first titles to work with this new standard. The game also uses the touchscreen, however, so you probably won't absolutely need to have a controller just to play.

Of course, that probably also means we won't see The Collectibles in action until iOS 7 is out, which means sometime later on this year. Hopefully we'll get a chance to see the game in action sooner rather than later.

In this article: controller, crytek, games, gaming, iOS, iPhone, made for iphone, MadeForIphone, mfi, new apps, NewApps, support, the collectables, the collectibles, TheCollectables, TheCollectibles
All products recommended by Engadget are selected by our editorial team, independent of our parent company. Some of our stories include affiliate links. If you buy something through one of these links, we may earn an affiliate commission.
Share
Tweet
Share