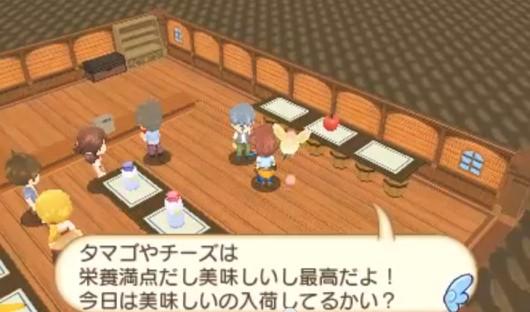 The Natsume booth feels more than a little out of place amid the murder and mayhem that defines the E3 show floor experience. For those weary of the pulsing music, constant explosions and gruff voice-overs blasting from every ear-level speaker in sight, Natsume's display of gentle, colorful games about farming and fishing can feel like an oasis from sensory overload.

While they've dabbled in just abut every genre known to man, an unexpected game called Harvest Moon – which hit the SNES long after it withered on the vine – has since become Natsume's strongest brand, with 19 prime series games to date. There's no end in sight for this strangely compelling series, though its creator Yasuhiro Wada has moved on to a new IP called Hometown Story, which he hopes will have the same longevity as the series that introduced the curious addictiveness of simulating mundane tasks years before The Sims. Meeting Wada, it's easy to see how his mellow nature informs the laid-back attitude at work in Harvest Moon; he's humble and soft-spoken, with a head of greying hair pulled back into a long ponytail. In his words, Hometown Story is an attempt to forge a new series, and one that will benefit from his decades of experience as a developer.

"With Harvest Moon, I didn't really have the complete image of the game in mind from the beginning," says Wada, who believes the 1999 N64 sequel stands as the full realization of his original concept. "I had to go through lots of trial of error to figure out what worked and what didn't. With Hometown Story, I have a very clear image of what I would like to put in the game, because I can now spend my time planning and directing the team."

At first glance, Hometown Story doesn't look too different from Harvest Moon: like Wada's first series, it features a variety of squat, adorable characters interacting with each other in a small community set against a rural backdrop. But according to Wada, his new IP will differ in a way that should feel significant to any Harvest Moon fans out there:

"Harvest Moon had three key elements: raising crops, taking care of animals and interacting with other characters in the village. But as the series moved on, there was more of a focus on the human relationships – especially getting married. When marriage eventually turned into the overall goal for some players, I started feeling a little awkward about that. With Hometown Story, I wanted to shift the focus from marriage to many different kinds of human relationships."

Though the games aren't entirely similar, Hometown Story shares some superficial qualities with Nintendo's Animal Crossing series, whose newest installment recently took over the social network feeds of friends and loved ones. Since players are bound to compare the two, I ask Wada about the biggest factor that separates his newest creation from Nintendo's own laid-back life sim.

Strong words, but delivered with Wada's charming brand of unassuming confidence. If you've grown tired or simply out-of-touch with the many, many iterations of Harvest Moon over the years, Hometown Story may act as a new beginning – much as it has for Wada himself.
In this article: 3ds, e3-2013, Harvest-Moon, hometown-story, NATSUME, nintendo, RisingStar, ToyBox, toybox-inc, Yasuhiro-Wada
All products recommended by Engadget are selected by our editorial team, independent of our parent company. Some of our stories include affiliate links. If you buy something through one of these links, we may earn an affiliate commission.