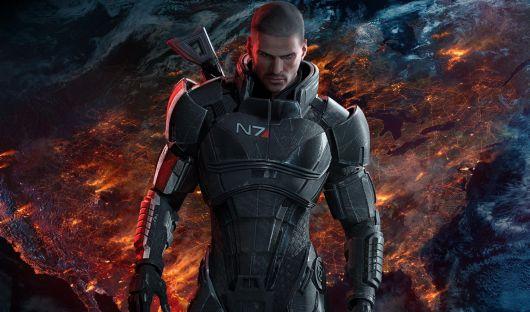 Toronto's AM640 did a radio interview recently with former BioWare scribe Drew Karpyshyn, in which he chatted about some of the alternate story theories and endings that BioWare tossed around for the Mass Effect series. Eurogamer has the highlights, including the theory that the Reapers were trying to stop organic life because they were somehow making use of "Dark Energy" (an element only mentioned briefly throughout the series) to bring about the end of the universe. "It's very vague and not fleshed out," says Karpyshyn, adding that "it was something we considered but we ended up going in a different direction."

BioWare also played with the idea that Shepard might be an alien at one point, though eventually deemed that too close to the story of Revan in Knights of the Old Republic. Karpyshyn also says BioWare thought about turning Shepard into some combination of organic and cybernetic, a theme that did eventually get generally included in the ending of Mass Effect 3.

But in the end, says Karpyshyn, these ideas were just ideas, and should be judged as such. "It's like vaporware," he says. "Vaporware is always perfect, anytime someone talks about the new greatest game. It's perfect until it comes out." Karpyshyn says that even if fans are disappointed with the story as it is, a story that included these other considered ideas, "whatever we came up with, it probably wouldn't be what people want it to be."

In this article: alien, bioware, dark-matter, drew-karpyshyn, interview, mass-effect, mass-effect-3, microsoft, pc, playstation, ps3, radio, series, story, writer, writing, xbox
All products recommended by Engadget are selected by our editorial team, independent of our parent company. Some of our stories include affiliate links. If you buy something through one of these links, we may earn an affiliate commission.