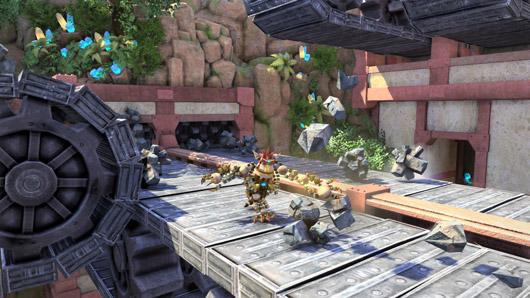 PlayStation 4 system architect Mark Cerny discusses the console's upcoming launch title Knack in a recent interview at PlayStation Blog, revealing that the project aims for international appeal among both the casual and hardcore crowds.

Continuing a decade-spanning career in which he designed games ranging from Marble Madness to Ratchet and Clank, Cerny currently serves as Knack's director and lead designer. He notes that Knack will feature multiple difficulty settings, in an effort to court veteran game players.

"We are definitely speaking to the nostalgia that people feel for the play experiences of the past," Cerny said. "If you play this game on the hard difficulty setting it will definitely challenge you. And the control scheme is on the simpler side but you'll need really think about how best to use it."

Cerny cites numerous influences for Knack's gameplay, hinting that Crash Bandicoot and God of War fans may find a lot to like in the finished product. "The way I look at it – there's a bit of Crash Bandicoot in there, a bit of Katamari Damacy, which is a game I love and must have bought three or four times over the years," he explains. "And there's a bit of God of War too. You can see that game's influence on Knack – especially in the control set, where the right stick is the dodge."

While Knack is developed by Sony's Japan Studio, Cerny mentions that the game was specifically designed for worldwide audiences. "The original concept was 'let's make an international title,'" he recalls. "The problem is that if you have a mascot, that mascot is going to be immediately identifiable as a Japanese mascot, or a US mascot, or whatever.

"Our way to get around that was to make the character an effect, so the first question was 'what sort of effect should he be?' We came up with the idea that he would pick up things in the environment and get bigger, and a year or so later Knack was born."

Knack will be available when the PlayStation 4 launches later this year.
In this article: japan-studio, knack, mark-cerny, ps4, sony, sony-japan-studio
All products recommended by Engadget are selected by our editorial team, independent of our parent company. Some of our stories include affiliate links. If you buy something through one of these links, we may earn an affiliate commission.