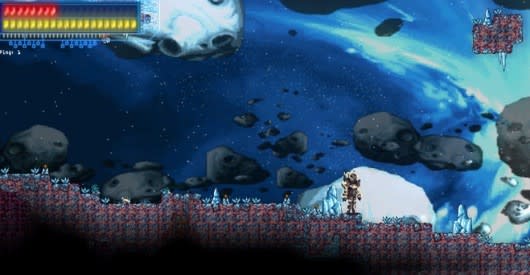 After getting approved by both Kickstarter and the Steam Greenlight program, the indie sandbox survival game, Edge of Space, is playable by the public, thanks to Steam's Early Access program. The game can now be purchased for an early access price of $11.99, just a few bucks off from the eventual $14.99 launch price.

Anyone buying the game for early access will also get a set of "First Responder Armor," with some extra bonuses as you leave your crashed spaceship and attempt to survive in an alien world. This release of the game is still in beta, and the developers promise there may be other early adopter rewards beyond encounters with "genetically-evolved polar bears."
Show full PR text
GREENLIT EDGE OF SPACE NOW AVAILABLE ON STEAM EARLY ACCESS

"It has been a long journey getting here, from Kickstarter to Greenlight, and now to Steam Early Access," said Jacob Crane, Founder and one of the Lead Developers of HandyMan Studios. "Without the dev team and the community support the game would not be where it is today. We are both excited and scared out of our minds, but we're ready to gain feedback so we can continue to grow and perfect the experience!"

Available at an on-sale Early Access price of $11.99 before pricing at $14.99 at launch, players who heed the call to ArkCo command early will receive "First Responder Armor" that grants bonuses to assist in those first waking moments after leaving the crashed space pod. Set in deep space, Edge of Space is an open-world, dynamically-generated sandbox survival-adventure game. Start with only a laser pick and the gear from the crashed pod, then immediately start collecting, as every piece of ore mined is valuable. Fight against an array of creative horrors including cybernetically-enhanced laser space sharks or vicious genetically-evolved polar bears -- and those are not even the strangest monstrosities to encounter!

At the absolute edge of space gamers must adapt or die! Good luck ArkCo Operative!
In this article: beta, early-access, edge-of-space, handyman-games, kickstarter, pc, steam-early-access, steam-greenlight
All products recommended by Engadget are selected by our editorial team, independent of our parent company. Some of our stories include affiliate links. If you buy something through one of these links, we may earn an affiliate commission.