Hearthstone: Know when to fold 'em 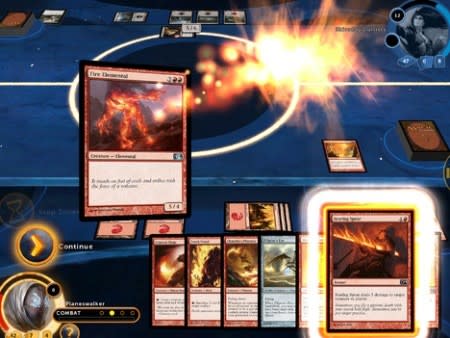 I got to see Magic 2014 in action back in May of this year, but the game is now available both on the iOS App Store and on Steam for both Mac and PC. (Update: Turns out it's not available for the Mac. Last year's version wasn't either, unfortunately.)

The biggest new feature of this year's go-round is the "sealed play" mode, which allows players to build a deck using cards from a set of sealed random booster packs. Usually in these games, you have to use one of the prebuilt decks, but the sealed play mode provides another option for experienced players (or anyone looking ot mix things up). Unfortunately, you only get a couple of deck slots to build in, and you can't reset them, so you have to buy more if you need them. Kind of a cheap move on Wizards of the Coast's part.

There are also brand-new cards in this game, and in fact some of the cards are available to play here even before they arrive in the paper game later on this year. Magic 2014 is a free download on the iPad, and then you can buy the whole game (or separate decks) via in-app purchase for $9.99.

In this article: deck, in-app purchase, In-appPurchase, iOS, iPad, Mac, magic, magic 2014, magic the gathering, Magic2014, MagicTheGathering, mode, new apps, NewApps, sealed deck, sealed play, SealedDeck, SealedPlay, wizards of the coast, WizardsOfTheCoast
All products recommended by Engadget are selected by our editorial team, independent of our parent company. Some of our stories include affiliate links. If you buy something through one of these links, we may earn an affiliate commission.
Share
Tweet
Share