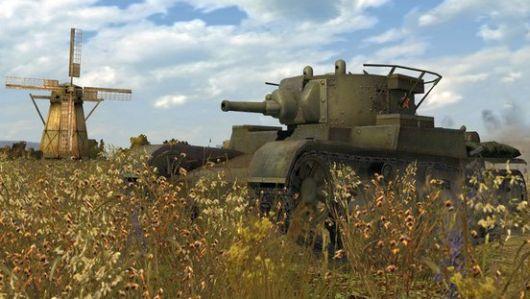 Tomorrow is the fourth of July, and if you're not aware, in the United States that date is kind of a big deal. So the staff behind World of Tanks decided that the best way to celebrate America's independence day is by having a bunch of armored vehicles take potshots at one another for big prizes. A tournament is running through the weekend for Tier III through Tier X tanks, with a big package of microtransaction cash going to the winning teams.

All teams will be paired up into groups, fight other teams in the same group, and be scored according to victory or loss. Battles will be limited to 10 minutes maximum. The big winners will be the teams with the highest score after the dust settles. If this sounds like it's your sort of celebration, there's still time to gather your team and register; if you'd rather just play the game, there are also plenty of promotions running over the holiday weekend just the same.

[Source: Wargaming.net press release]
In this article: 4th-of-july, competition, competitions, esports, f2p, fourth-of-july, free-to-play, historical, july-4th, july-fourth, promotion, promotions, pvp, tank, tanks, tournament, tournaments, war, wargaming.net, world-of-tanks, wot
All products recommended by Engadget are selected by our editorial team, independent of our parent company. Some of our stories include affiliate links. If you buy something through one of these links, we may earn an affiliate commission.