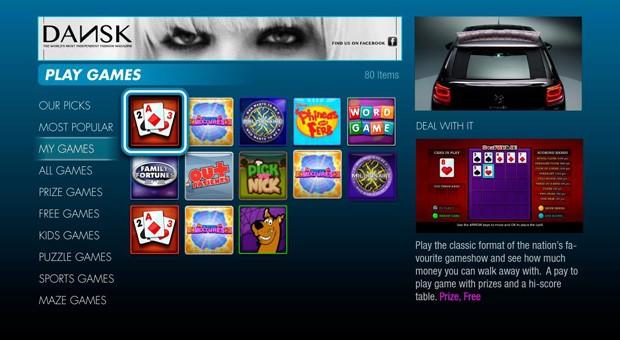 Many of us don't see TiVos as game consoles, but Virgin Media would beg to differ -- there have been over a million game sessions this year on its edition of the DVR. Accordingly, it just launched a Play Games portal to court this growing audience. Besides putting games in one handy location, the hub saves game states and ranks favorite titles. Virgin is also recruiting more developers to expand Play Games' fledgling catalog. While the casual gaming focus is unlikely to stop serious players from pre-ordering an Xbox One or PS4, it may be enough to keep TiVo owners on the couch long after their favorite show is over.

With Virgin TV customers racking up more than one million game plays on TiVo this year already, Virgin Media is seeking more developers to join its platform. Creators of casual games are being encouraged to work through Two Way Media, Virgin Media's app development partner, to integrate, test, host, launch and monetise games on TiVo using its game framework which can make Flash games ready for the platform in under a week.

Virgin Media's new portal now allows players to save and track progress through games and automatically ranks the ones they most frequently play, making them easier to find.

New games are scheduled to be launched over the coming months, enabling Virgin Media customers to play more of the kinds of games they love on other devices without the need for a second screen. Current games include Who Wants to be a Millionaire? and Scooby's Creepy Cake Factory, with two new games, Mahjong and Darts Darts Darts, now available.

Commenting on the launch, Virgin Media's Charlotte Reece, said: "The introduction of Play Games will give causal gaming a great new look on TiVo and the addition of extra games will add even more entertainment to what is the UK's most advanced connected TV service. With 1.5 million households across the country already enjoying all that TiVo has to offer, we're giving developers access to a whole new audience and the chance to bring new ideas and even more fun to home entertainment."

Two Way Media chief executive James Turner said: "Virgin Media's TiVo platform makes it very easy for their customers to find and play games, and their growing subscriber base provides an excellent opportunity for developers to generate meaningful revenues from their games."

In this article: CasualGames, dvr, gaming, hdpostcross, hdpostmini, minipost, playgames, television, tivo, tv, uk, virginmedia
All products recommended by Engadget are selected by our editorial team, independent of our parent company. Some of our stories include affiliate links. If you buy something through one of these links, we may earn an affiliate commission.