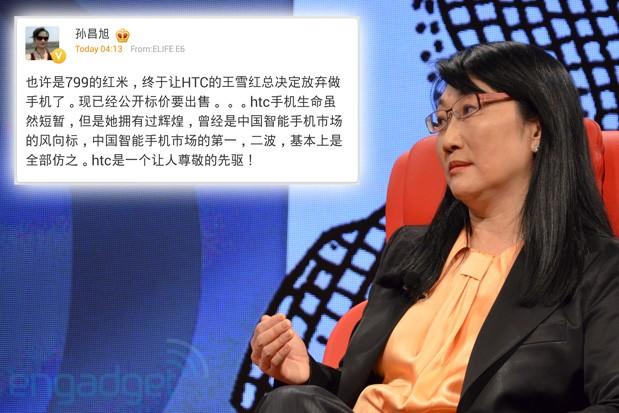 Poor HTC just can't get a break. Earlier this week, EE Times' famed Chinese analyst Alice Sun posted a rather worrying rumor on Sina Weibo: apparently HTC chairwoman Cher Wang is giving up making mobile phones, and that she's already put her company on the market with a price.

While Sun is usually known for reliable insights, this particular piece of gossip was quickly shot down by HTC, including China head Ray Yam who allegedly responded to a text message inquiry from Mobile China Alliance's secretary. At yesterday's corporate family day event, Wang also assured her colleagues that HTC will not be sold, according to Taiwanese publication UDN.

The following statement we received from HTC more or less echoes Wang's speech at the event:

"Based on recent inquiries related to rumors that HTC is looking to sell the company, we want to confirm that those rumors are untrue. HTC is committed to innovation and will continue to deliver new designs and products to consumers worldwide. We appreciate the support and affirmation of our customers and have new initiatives underway to further build our global presence and a full resurgence of the HTC brand."

Despite having deleted the original weibo post "for some peace and quiet," Sun implied in a follow-up post that time will tell the truth. Well, regardless of the outcome, good thing HTC has Tony Stark on its side.

In this article: alicesun, cherwang, htc, mobilepostcross, rayyam, rumor
All products recommended by Engadget are selected by our editorial team, independent of our parent company. Some of our stories include affiliate links. If you buy something through one of these links, we may earn an affiliate commission.