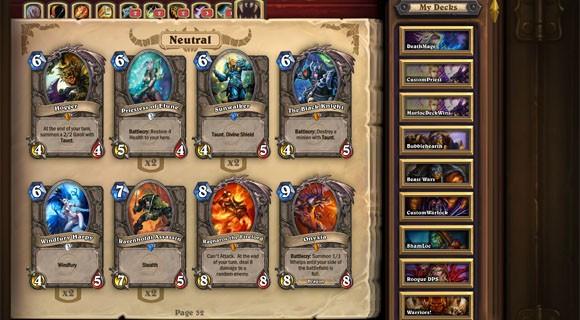 Creating decks in Hearthstone is fairly straightforward. But you can't just walk in and put any pile of cards together and expect it to be able to compete. First you select the class you want to play. You are then restricted to only use the cards that belong to that class along with cards available to all classes. Just about all of the cards in Hearthstone can be divided into three major categories: Removal, utility, or minions.

Most well rounded decks will feature elements of all three.

Unless you're playing an opponent with almost no minions, your deck is going to need methods to deal with threats on the board. This is where removal comes in.

Just about all the class have some way to deal with enemy minions. Druids can use Naturalize. Hunter decks have the option to use Kill Command. Mages have a unique one where it isn't targeted but relies on a special card type called a secret. Vaporize only activates based on a condition. If a minion attacks the hero, they are immediately destroyed.

There are board clearing cards like Flamestrike or a Paladin's Consecration (which combines really well with Equality). Cards like these are useful as a way to help equalize the board or remove other threats.

But not all removal has to mean outright killing creatures. A Rogue can use Sap to "bounce" a minion back to their owner's hand. A Priest can Mind Control an enemy minion removing it from the hands of the enemy and making it theirs. A well timed Sap on an opponent's Sunwalker can open the way for your minions to deliver the finishing blow. Just remember that when you return it back to their hand, they'll have the ability to use their Battlecry effects. It's probably a bad idea to use Sap on your opponent's Onyxia.

Most decks will want a nice balance between 4-8 removal spells. Certain spells can target either minions or heroes such as Soulfire.

If removal is considered the potatoes of the deck, then the minions are the meat. Each class has it's own set of relatively "themed" creatures but you'll still be pulling a large number of them from the neutral pile.

There are certain minion classes in the game that play off each other minion types. For example, there are demons, beasts, and murlocs. They have certain passive abilities that can buff other creatures of their type so it's often beneficial to include more than one.

Each minion has different abilities and here are some of the more common ones:

Some minions have abilities that don't quite fit in with the above list. Their details are listed in the card itself. Examples include Mana Addict, Master Swordsmith, and Raid Leader.

Certain mechanics won't work and can override the other. If a minion has both Stealth and Taunt, the Taunt portion won't be active unless the minion drops out of stealth. A stealthed creature can be removed with mass removal spells.

Running a deck with around 12 - 18 minions should be adequate.

The final category is general utility. They're not minions and they don't always deal damage. These cards help provide you with advantages in one way or another. They either accelerate your deck in some fashion or can help make life harder for your opponent.

Secrets belong in this section. A secret is a type of card that will activate when a condition is met. Your opponent won't know what that secret is unless they fulfill that condition. A Hunter can use Explosive Trap to help weaken their opponent's side of the map. A Mage's Counterspell will stop the next card in it's tracks. A Paladin can use Redemption to help bring a minion back to life.

Depending on the class deck that you're playing, your utility spells will often revolve around those specific class spells. As a priest, I'm relying on ways to make my minions live longer to outlast my opponent's creatures. Running low on cards? Mages can rely on Arcane Intellect to help maintain a card advantage over their opponent. Druids can use both Wild Growth and Innervate to help ramp up their availability of Mana Crystals to cast stronger spells.

You'll want strong utility spells that complements the win conditions of your deck.

Anywhere from 2 - 8 is usually suitable. Again, this is based on the theme of your deck and how it plans to win.

Mana Crystals are the resources that that you need to cast spells and minions. Each card costs a certain amount of mana before it can be put out into play. During your first turn, you will gain mana crystals. Certain cards can affect the availability of mana crystals. What you want to next consider is the mana crystal "curve" of your deck. You don't want a deck full of cheap 1 or 2 mana costing creatures. But you don't want a deck that's loaded with 7 mana costing creatures of higher either. The stronger cards typically have higher mana costs associated with it which means more waiting around until you can deploy them onto the battlefield.

Your deck needs the right mix of early cheap creatures that can either stave off an assault (or provide your opening offense) as you slowly build up your supply of mana crystals. As you transition into the middle game, you'll want to begin asserting a little more board control so that when you eventually draw into your larger creatures as finishers, they'll have a clear path. The ideal sweet spot of a curve is going to vary depending on which deck class you intend to field.

Here's a quick paladin deck that I threw together that helps illustrate the idea of curves.

This deck has 10 one drops, 8 two drops, a three drop, and the rest are 4 mana cost or higher. It's decently well balanced but could use a few more tweaks here and there. The basic idea of this deck revolves around the usage of Divine Shield to outlast the opponent's minions and endure. The finishers are either going to be Avenging Wrath or Argent Commander. The Truesilver Champion helps whittle away at the opposing hero while providing you with health to keep staying in the game. The Equality + Consecration combo is in place to help wipe the board in case of an emergency. Sit on your Ironbeak Owl's to isolate any minion threats on the board (seriously, get a pair of these as they're so versatile and can fit in virtually any deck). Divine Favor will help replenish my hand size as I'll be doing my best to empty my hand of and attempting to outlast my opponent.

Notice how I have a strong ratio of cheap cards to expensive cards. This ensures that there's a high chance I can actually do something on the opening turns. It's no fun having to wait until turn 3 before being able to play a card (trust me, I've been there).

The next thing we'll look at is something called card synergy. How well do cards react to one another? What kind of combinations and plays can be setup? The best combos involved two cards but ideally no more than three. With a deck being limited to only two copies of a card, you can't always plan around your main card combos working so it has to be able to perform decently without it.

We'll save card synergy for another time, however!
In this article: deck, deck-construction, hearthstone
All products recommended by Engadget are selected by our editorial team, independent of our parent company. Some of our stories include affiliate links. If you buy something through one of these links, we may earn an affiliate commission.