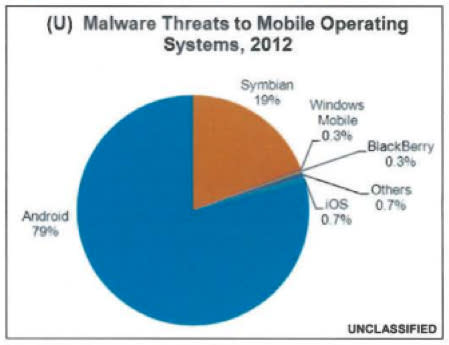 A cautionary memo put out by the US Department of Homeland Security and the US Department of Justice shows that, according to the government's findings, only 0.7 percent of all mobile malware is designed to take advantage of iOS. This figure is in stark contrast to the Android OS, which the memo reports accounts for 79 percent of mobile malware threats. The release was published by the website Public Intelligence.

The memo, which reports its data as being from 2012, was targeted at police, fire and emergency personnel. It goes on at length with tips for Android users to avoid common malware scams such as seedy SMS messages and counterfeit apps. In addition to ranking both iOS and Android, the report shows that 19 percent of malware is designed to affect the Symbian OS, 0.3 percent for Windows Phone and 0.3 percent for BlackBerry.

In this article: android, department of justice, DepartmentOfJustice, government, homeland security, HomelandSecurity, iOS, malware, security
All products recommended by Engadget are selected by our editorial team, independent of our parent company. Some of our stories include affiliate links. If you buy something through one of these links, we may earn an affiliate commission.