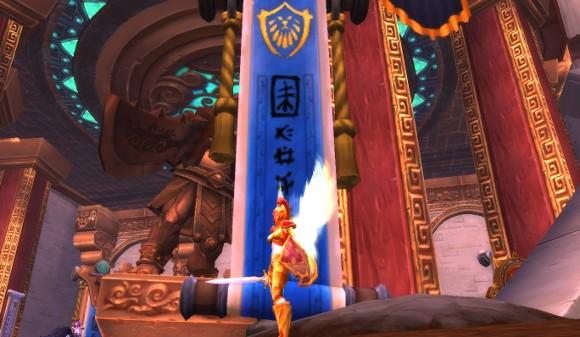 Blizzard's Game Director Tom Chilton and Lead Content Designer Cory Stockton have really gone out on a limb with interviews at Gamescom, spilling every bean and answering every question with the transparency and openness we're coming to expect from new look Blizzard. One question they were asked related to the up-scaling of low level dungeons. Tom responded as follows:

That's something that we did actively work on and certainly the technology is pretty well in place at this point. We were also hoping to get the dungeons to a point where they were scaling, however we didn't actually end up coming up with a reward scheme that we felt fit correctly.

I think it's important to remember that today, players can go back and do old content by soloing it and they usually do that to get the transmog gear, and I think if they were going to to go back and do it as a true 25-man raid of Black Temple, as an example, they'd would have to feel like they were getting something that was useful for it as well as transmog gear, and we still have to figure out what the right reward scheme for that is.

We don't want it to compete with the new raid in terms of getting you the best possible gear, but at the same time, it has to be worth something. So that's something we haven't really resolved yet, so we won't be seeing scaling raids until sometime in the future.

So what do you think they could offer as a reward for redoing old content "properly", in an upscaled raid or as downscaled characters? I feel like points, Valor, Justice, whatever, would be a good reward, along with the transmog gear and pets, but maybe also a low and random drop-rate of Garrosh-style heirloom weapons. What's your take on it?
In this article: black-temple, breaking, gamescom-2013, old-raids, raiding, retro-raids, tom-chilton
All products recommended by Engadget are selected by our editorial team, independent of our parent company. Some of our stories include affiliate links. If you buy something through one of these links, we may earn an affiliate commission.