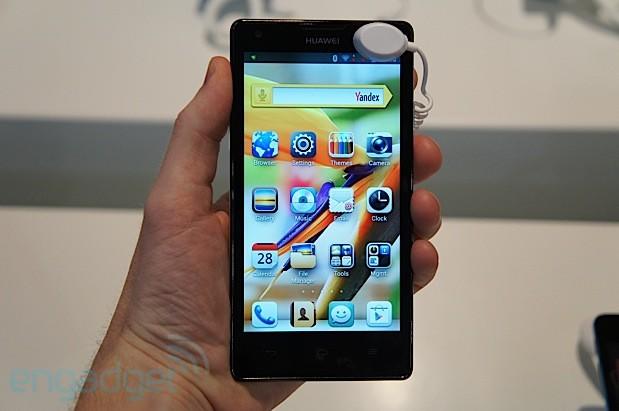 The G in Huawei's letter-based lineup is meant to be midrange at best, so it's no surprise that the Ascend G700 hasn't been the subject of as much eager anticipation as, say, a certain new Nexus. Still, the device, which was announced this week and expected to arrive in China next month, was deemed worthy enough to be seen by thousands of onlookers in the company's booth at IFA 2013. The Android 4.2 smartphone features Huawei's Emotion UI, dual-SIM support, a 720p IPS display, 1.2GHz quad-core MediaTek Cortex-A7 SoC, 2GB RAM, 8MP rear camera and 1.3MP front-facing shooter. In our brief time with the device, we liked the overall feel of the 5-inch phone; its arched smooth plastic back, which maxes out at 9mm thick, was adequately comfortable to hold. It's a midrange phone through and through, which means you're going to get a lot of decent performance with -- you guessed it -- decent specs. It's a sleek device, so hopefully the price is right (though phones in this series rarely if ever go above ¥2,000 or about $320 unsubsidized). Check out some more images of Huawei's latest below. 34
In this article: ascendg700, g700, hands-on, huawei, ifa, ifa2013, mobilepostcross
All products recommended by Engadget are selected by our editorial team, independent of our parent company. Some of our stories include affiliate links. If you buy something through one of these links, we may earn an affiliate commission.