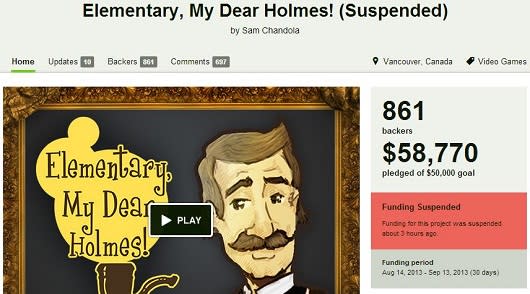 The crowdfunding campaign for Elementary, My Dear Holmes was suspended by Kickstarter today. The point-and-click adventure game had already reached its $50,000 goal, earning $58,770 before its suspension, days before it was slated to end on September 13. The reasons for the project's suspension by Kickstarter are unclear, though the developer said it addressed concerns regarding "suspicious accounts" that supported the game.

"When the uproar against Elementary, My Dear Holmes was brought up, we contacted Kickstarter and Amazon, asking them to investigate the accounts and take action accordingly," the game's creator Sam Chandola told backers. "We wanted to get on top of this and did not want anything to do with any of what was happening as it was an extremely negative campaign for us. Strong personal accusations were going up against us, and it was a huge drain on our time, energy and resources."

Ouya announced its $1 million Free the Games Fund program in July as a means of encouraging developer support of its console by offering monetary rewards for successful Kickstarter-funded games that vow to remain Ouya-exclusive for six months. Elementary, My Dear Holmes was one of two games that reached its funding goals last week as part of the program. The other game, Gridiron Thunder, fell under scrutiny for the amount of funding it received from just 126 backers. According to Ouya, the project "successfully qualified to receive the match," and is still up on Kickstarter, sitting at $114,437 from 161 funders with 46 hours before the campaign ends. "The decision to suspend the Kickstarter campaign for Elementary, My Dear Holmes was made by Kickstarter. And at this time, you have the same information that we do," Ouya told Joystiq in a statement. "An essential element of the Free the Games Fund is that only projects that are successfully funded through Kickstarter are eligible. Until Kickstarter raised a red flag on this project, it complied with our terms and conditions."

As for Elementary, My Dear Holmes, Chandola told Joystiq that he is turning to other funding methods. "We had quite a few venture capitalists interested in the project after seeing our initial pitch video and the traction we were getting, and that is the path that we will be taking now," he said. "I have already received mails from a few of them after the plug was pulled expressing their support and interest for the project, so Elementary, My Dear Holmes will definitely be a game that will see the light of day."

Ouya added, "We are confident in Kickstarter's process for verifying the integrity of campaigns on their site. We launched this fund to find the next great game developer as determined by gamers. It's unfortunate that this has happened, but we know the next great game is out there."

We've reached out to Kickstarter for comment on the project's suspension, and will update as we learn more.
In this article: android, cancelled, elementary-my-dear-holmes, free-the-games-fund, gridiron-thunder, mobile, mogotxt, ouya, sam-chandola, suspension, victory-square-games
All products recommended by Engadget are selected by our editorial team, independent of our parent company. Some of our stories include affiliate links. If you buy something through one of these links, we may earn an affiliate commission.