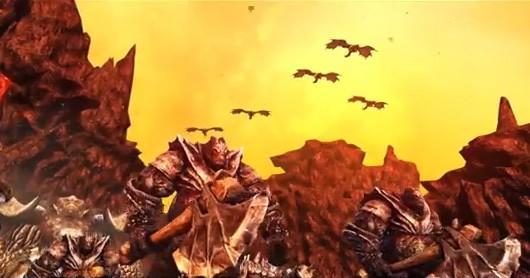 Dragon's Prophet may barely be (officially) out of the gate, but Infernum isn't going to let a little thing like launch slow it down. The Berlin-based publisher just released a new video that shares the story of approaching dangers that are coming to the European shores of the game and shows off a bit of the new region of Aluntia. What dangers will players meet in this new land? How about enormous orcs and seething streams of lava... and a little thing like the followers of Kronos trying to resurrect that legendary villain. On the plus side, there will be new dragons available for players to tame and train as well!

More details about the upcoming patch and the new region will be coming over the next few days. Until then, get a glimpse of these upcoming dangers in the trailer after the break.

In this article: Aluntia, dragon, dragons, dragons-prophet, housing, infernum, infernum-productions, new-area, new-content, new-zone, runewaker, runewaker-entertainment, soe, sony, sony-online-entertainment, trailer, trailers, video, videos
All products recommended by Engadget are selected by our editorial team, independent of our parent company. Some of our stories include affiliate links. If you buy something through one of these links, we may earn an affiliate commission.