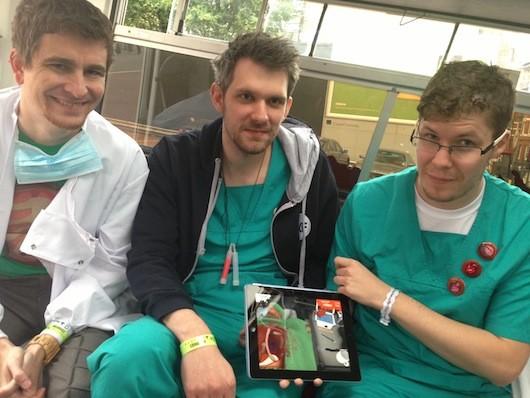 Bossa Studios is prototyping for a tablet version of game-jam-creation-turned-hit Surgeon Simulator 2013, although its release isn't a certainty at this stage. I got to spectate (and discuss) their latest operation over the weekend in a themed ambulance parked outside the Eurogamer Expo. Knowing Bossa and its happily "100 percent medically inaccurate" sim, I shouldn't have expected anything less.

I saw a prototype build that had been cooked up in just two days, in which Bossa's Luke Williams grabbed, chucked, and slammed various parts of the patient's innards across the iPad screen. This apparently was the sixth control iteration of the tablet version, now supporting a Z-axis that automatically adjusted with every tap, click, or swipe. This allowed Williams to maintain precision across the 3D operating table as he thoroughly took apart the patient's diaphragm, which was clearly asking for it.

Bossa isn't definite about bringing out the tablet version but is seriously considering it, not just because the British studio believes tablets offer more direct, weightier controls, but also because the devices lend themselves to new surgeries. One idea Bossa has involves cracking teeth, pulling them out, shoving new ones in, then chucking the canines away, maybe down the patient's throat - you get the idea. Although, as Tom Jackson notes, this wouldn't be called dentistry: "Probably a tooth transplant," he laughs.

If a tablet version goes ahead, it's unclear if it'll hit this year or next. Jackson seemed to think this year was a bit unlikely, but the rest of the Bossa team suggested otherwise. "Potentially, a few more sleepless nights, Tom, and I think we could do it," Williams joked as Jackson laughed, almost mournfully. Ah, the endless strain of the medical profession.
In this article: bossa-studios, ios, ipad, mobile, surgeon-simulator-2013
All products recommended by Engadget are selected by our editorial team, independent of our parent company. Some of our stories include affiliate links. If you buy something through one of these links, we may earn an affiliate commission.