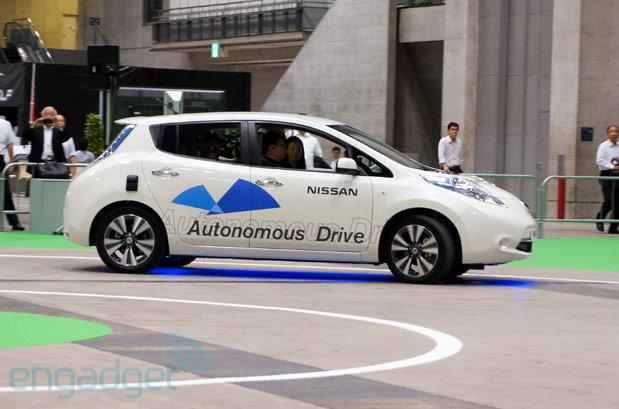 Now that Nissan's partially automated Leaf has the proverbial green light to traverse some of Japan's roadways, we figured we'd place our lives in the hands of various computer systems in order to have one whisk us around a test track at CEATEC. This year's autonomous Leaf demo was a step up from last year, with our test vehicle trained to not only stay between the lines, but also pause and evaluate the situation when faced with a fellow car.

An on-site representative informed us that off-the-shelf PC components are being used to calculate its motions at the moment, and yes, it's a Windows-based system underneath (for now, anyway). A suite of prohibitively expensive lasers keep the car from veering outside of its lane, while onboard processing determines whether a stopped or slowed vehicle is passable or not. The company has tested the automated Leaf at speeds as high as 70 kilometers per hour, but we barely broke 15 on the track. Speaking of which, you can catch a bit of footage from our ride just after the break. 8
In this article: automobile, autonomous, autonomousvehicles, car, ceatec, ceatec2013, hands-on, japan, leaf, nissan, self-driving, self-drivingcar, video
All products recommended by Engadget are selected by our editorial team, independent of our parent company. Some of our stories include affiliate links. If you buy something through one of these links, we may earn an affiliate commission.