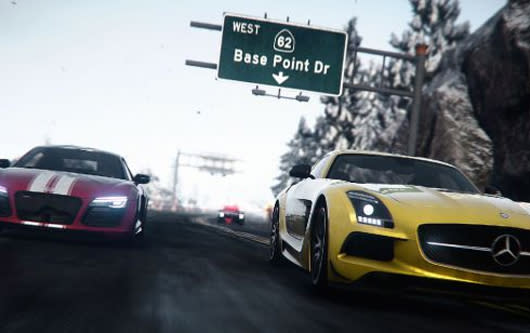 The Xbox One will be available in 13 different markets on November 22, while the PS4 will make its entrance a week earlier in North America on November 15. Europe will receive the PS4 on November 29.

Players assume the role of both cops and lawbreakers in Need for Speed: Rivals, which is the inaugural outing of Ghost Games – the rebranded EA Gothenburg studio in Sweden. Ghost Games is made up of talent moved over from UK-based Criterion Games, best known for its work on the Burnout series and shooter Black, along with former DICE staff.
Show full PR text
NEED FOR SPEED RIVALS CROSSES THE LINE ONTO NEXT GENERATION CONSOLES THIS NOVEMBER

Usher in the next generation of high-octane racing when Need for Speed™ Rivals arrives in time for the holidays! In North America, Need for Speed Rivals will be in-stores starting November 22 for the Xbox One®, the all-in-one games and entertainment system from Microsoft and the PlayStation®4 computer entertainment system. In Europe, the game will be available starting November 22 on Xbox One and November 29 on PlayStation 4.

Need for Speed Rivals puts gamers behind the wheel of both sides of the law, daring them to cross the line as either a cop or racer in order to gain any advantage in the street's ultimate rivalry. Players will choose between two distinct career experiences, each with their own set of high-stakes challenges, rewards, pursuit tech and cars. The intensity of the action is at an all-time high thanks to AllDrive, a revolutionary new feature that destroys the line between single player, co-op and multiplayer. Through AllDrive, friends will be seamlessly connected to one racing world where their races and chases can collide at any time, creating the ultimate edge-of-your seat experience.

*Conditions and restrictions apply. See http://store.origin.com/store/ea/en_US/pd/productID.257622000 for details.
In this article: ea, ghost-games, microsoft, need-for-speed-rivals, playstation, ps4, release-date, xbox-one
All products recommended by Engadget are selected by our editorial team, independent of our parent company. Some of our stories include affiliate links. If you buy something through one of these links, we may earn an affiliate commission.