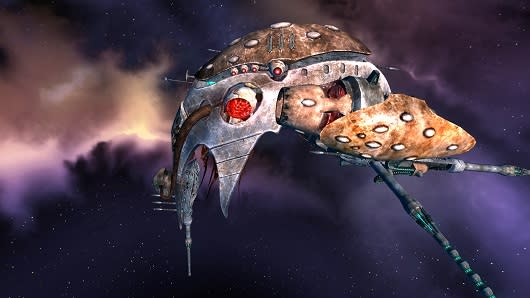 Digitilus re-launched its Kickstarter project for Skyjacker, a "first-person, free-roaming space combat simulator." The developer is seeking $150,000 by November 22 to fund the space-faring game.

Skyjacker puts players in the role of a space pirate, completing story campaign missions and looting convoys from the game's 10 alien civilizations, upgrading their piecemeal ships along the way. The PC, Mac and Linux game features co-op play, so friends can join in on the space combat campaigns, as well as session-based competitive multiplayer modes such as team deathmatch and capture the flag. Digitilus crafted a mission creation toolset for players to use as well, offering the ability to draw up game scenarios for others to play.

While Digitilus successfully raised $36,131 for its Starship Constructor app in January, the full game saw one failed crowdfunding campaign conclude in July 2012, and another cancelled in May 2012. Both of those campaigns had $200,000 goals, one of which rallied $128,238 in support, so the developer's lowered expectations this time around may prove fruitful.
In this article: crowdfunding, digitilus, kickstarter, mac, pc, simulation, skyjacker, space-combat, spaceship
All products recommended by Engadget are selected by our editorial team, independent of our parent company. Some of our stories include affiliate links. If you buy something through one of these links, we may earn an affiliate commission.